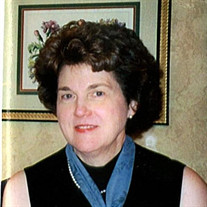 Judith Dressel Moore, age 78, died Friday, February 14, 2020 at St. Elizabeth's Hospital in O'Fallon after a long illness. She is survived by her husband of 25 years, Robert H. Moore, Jr., as well as her brother and sister-in-law, Kendall and Debra Dressel and her nephew, Patrick Dressel and wife Amanda as well as her great-niece, Emma Dressel and great-nephew, Hunter Dressel. She will be missed by many loving family members and friends. She was preceded in death by her parents, Glen Allen Dressel and Murlene Dressel Reynolds. Judith was valedictorian of her class of 1959 of Wesclin High School where she was a drum majorette and a flutist in the school marching band. She was a graduate of Northwestern University of Chicago where she received a Bachelor’s Degree and was a member of the Alpha Xi Delta Fraternity and lived in the sorority house on campus. She graduated from the University of Chicago School of Social Service Administraion in 1967 where she received a Master’s Degree. She had postgraduate training in negotiation at Harvard University and management training at the University of Michigan. Judith had a distinguished business career; she was the manager in charge of all state and local government relations for Kodak as well as Assistant to the President. She was with Kodak for 20 years and was one of the first female executives with the company; then became the CEO/President of National Industry for the Blind (NIB), one the nation’s largest nonprofits. She was CEO/President of several companies; a tech company, EdVerify; and the largest being the for-profit subsidiary of Educational Testing Services, The Chauncey Company. Judith was a member of the Defense Advisory Committee for Women in the military reporting directly to the U.S. Secretary of Defense. She served on the Committee of the Conference Board and the U.S. Chamber and was a Director of Sylvan Learning when it was a publicly traded company. She was a member of the Army and Navy Club of Washington D.C., the Woman's Club of Richmond, Virginia, and the Nassau Club of Princeton, New Jersey. Judith was a pioneering woman that broke the glass ceiling for women in top management; a true pioneer for women's rights. She had appointments in two medical schools - The University of Rochester, NY and Washington University, St. Louis, MO and was Executive Director of two social agencies - one with disability focus. She was named Citizen of the Year by New York Optometrist Society and Executive of the Year by the United Way of Rochester, NY as well as Rochester's Jaycee's Young Citizen of the Year. She was on the Board of the Philharmonic Orchestra of Rochester, NY and Board member of the Rochester Counsel of the Boy Scouts of America of Rochester, NY. Judith's contributions to business and social life of her communities will be missed. Funeral services will be held at 2:00 pm on Monday, February 17, 2020 at Nordike Funeral Home in Breese. Burial will follow at College Hill Cemetery in Lebanon. Visitation will be held from 12:00 pm until the time of services on Monday, February 17, 2020 at Nordike Funeral Home in Breese. Memorials made in memory of Judith are suggested to the ASPCA, 424 E. 92nd Street, New York, NY 10128.

Judith Dressel Moore, age 78, died Friday, February 14, 2020 at St. Elizabeth's Hospital in O'Fallon after a long illness. She is survived by her husband of 25 years, Robert H. Moore, Jr., as well as her brother and sister-in-law, Kendall and... View Obituary & Service Information

The family of Judith Dressel Moore created this Life Tributes page to make it easy to share your memories.

Send flowers to the Moore family.