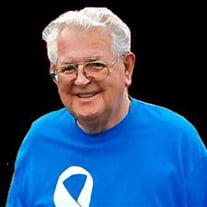 Joseph Edwin Thomas, age 75, of Beckemeyer passed away on Thursday, July 6, 2017 at St. Joseph’s Hospital in Highland. Joe was born in Jamestown, Illinois on March 18, 1942, the son of Charles and Linda (Frey) Thomas. He married Sharon Hoffman on May 4, 1968 at St. Anthony Church in Beckemeyer, and she survives in Beckemeyer. In addition to his wife, Joe is survived by his son Brad (Dawn) Thomas of Beckemeyer; two grandchildren: Kirsten and Bradon Thomas of Beckemeyer; brothers-in-law: Joe (Joan) Perez and Frank Edwards; three nieces: Linda Thomas, Stacie Perez, and Debbie Sincox; four nephews: Eldon Hammond, John Hammond, Brian Perez, and Steve Thomas. He was preceded in death by his mother and father, as well as his mother-in-law Wilma and father-in-law Laverne Hoffman; two brothers: Leroy and Charlie Thomas; three sisters: Betty Hammond, Linda Perez, Marlene Edwards; his in-laws: Mary Thomas, Melba Thomas, and Eldon Hammond; a niece, Lea Edwards; and his nephews: Mark Hammond, Jeff Thomas, Rob Edwards, and Michael Thomas. Joe was a veteran of the United States Army and served in the Vietnam War. After his services he was a heavy equipment operator for the civil services at Scott Air Force Base. Joe was extremely active in his community. During his time in Beckemeyer he served two terms as mayor and several years as village trustee. He served many years on the Beckemeyer – Wade Fire Department and was the Wade Township Treasure and Supervisor. Mr. Thomas was a member of the Beckemeyer Community Development Club and Washer Club. He was the past commander of Beckemeyer Legion Post 1227, where he was also a member of the drill team, volunteered his time at fish fries, and called bingo. He was a member of the Vietnam Veterans Chapter 269. His hobbies included gardening, hunting, fishing, camping and playing cards. Most of all, Joe enjoyed frying chicken for family gatherings with his famous chicken fry mix and being with his friends and grandchildren. He was his grandkids biggest fans. He never met a stranger and could always be seen with a smile on his face. A Celebration of Life Service will be held at 12:30 PM on Sunday, July 16, 2017 at the Beckemeyer American Legion. Friends and family are invited to stay and visit with the family at the legion following the services. Visitation will be held from 9:30 until 12:30 PM on Sunday, July 16, 2017 at the Beckemeyer American Legion. Memorials are suggested to Vietnam Veterans Chapter 269 or Beckemeyer American Legion Post 1227 and will be received at the Legion or at Nordike Funeral Home in Carlyle.

Joseph Edwin Thomas, age 75, of Beckemeyer passed away on Thursday, July 6, 2017 at St. Joseph&#8217;s Hospital in Highland. Joe was born in Jamestown, Illinois on March 18, 1942, the son of Charles and Linda (Frey) Thomas. He married Sharon... View Obituary & Service Information

The family of Joseph E. "Joe" Thomas created this Life Tributes page to make it easy to share your memories.

Joseph Edwin Thomas, age 75, of Beckemeyer passed away on Thursday,...

Send flowers to the Thomas family.