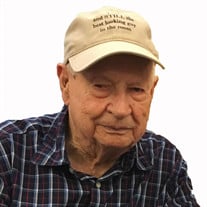 John Jacob “Jack” Schaefer, 101, of Albers, passed away Saturday, March 30, 2019 at Aviston Countryside Manor. He was born September 2, 1917 in Linn, MO, the son of Joseph and Elizabeth, nee Reinkemeyer, Schaefer. He married Bernadine M. Wellen June 3, 1941 at. St. Bernard Catholic Church in Albers and she preceded him in death on May 30, 2006. Jack is survived by his children, Donald (Becky) Schaefer of Swansea, IL, Diane (Donald) Podzamsky of Prattville, AL, Corla Schaefer of Aviston, IL, John C. Schaefer of Ellington, MO, Randall Schaefer of Belleville, IL, Leslie “Les” Schaefer of Greenville, IL, and Cynthia (Peter) Johnson of Cocoa, FL; grandchildren, Douglas, Michael, Dean, Denise, Rhonda, Michelle, Robert, Katie, Tricia, and Nick; great-grandchildren, Danielle, Abby, Hannah S., Erik, William, Emma, Kyle, Nathan, Megan, Hannah P., Chloe, Kylan, Aden, Landen, and Jack; great-great-grandchildren, Harper, Nora, and Emma; a brother, Bernard “Bud” Schaefer of KS; two sisters-in-law, Paulette Wellen and Anita Wellen; as well as numerous nieces and nephews. In addition to his parents and wife, he was preceded in death by two grandchildren, Rodney and Renee; 10 siblings; and brothers-in-law and sisters-in-law. In the mid 1930’s, Jack served in the Civilian Conservation Corp for a year and a half before traveling over 140 miles from his hometown to go to work as a hired hand on a farm in Albers, which is also where he would find his future wife, Bernadine. Since the country was coming out of the Great Depression, Jack found work where he could; dairy farms, logging, oil fields, and day laborer. He then worked for the Alfa Corn Feed Mill Company and the Russell Miller Milling Company in East St. Louis until 1958 when he moved to Holtkamp Feed Mill in Aviston. He also worked at H and N Equipment Company. After retirement, he mowed the 240 acres of grass at Carlyle Lake and properties for the Village of Albers, he drove the school bus, and was a crossing guard. Jack found water sources for communities and helped anyone who needed it. He was a member of St. Bernard Parish in Albers; he was an avid St. Louis Cardinals fan, he enjoyed playing the guitar and harmonica, bingo, the lottery, gardening, trapping, fishing, making wine, and always enjoyed a good game of pinochle or euchre. Jack was a loving husband, father, grandfather, great-grandfather, and great-great-grandfather. He was a dedicated community member and a dear friend to many. Funeral Mass of Christian Burial will be held at 11 a.m. Wednesday, April 3, 2019 at St. Bernard Catholic Church in Albers with Rev. Anthony Onyango and Deacon Glenn Netemeyer officiating. Burial will follow at St. Bernard Cemetery in Albers. Friends may call Wednesday, April 3, 2019 from 9:30 a.m. until 10:45 a.m. at St. Bernard Catholic Church in Albers. Memorials may be made to Hospice of Southern Illinois and will be received at the funeral home.

The family of John Jacob "Jack" Schaefer created this Life Tributes page to make it easy to share your memories.

Send flowers to the Schaefer family.