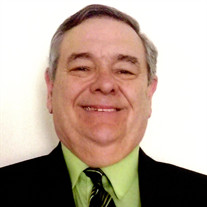 John C. Norbeck, 66, of New Baden, passed away at his home on Thursday, August 15, 2019. He was born June 27, 1953 in Belleville, to the union of the late Albert Lawrence and Marie, nee Rensing, Norbeck. He had been a life-long resident of New Baden since moving here in 1954. He attended St. George Catholic School and graduated from the Wesclin School system in 1971. In 1973 he married Deborah Dixon. To this union, three sons were born (Timothy, Brian, and Christopher). He attended Kaskaskia College where he earned his certification as a mechanic and welder. He worked various jobs as a mechanic, carpenter and plumber before entering the Navy in 1986 as machinist mate out of Norfolk, VA, and served upon the USS Charleston. He left the Navy with an honorable discharge in 1989. Upon leaving the Navy he returned to New Baden and was employed in the maintenance departments at John Cochran Veterans Hospital Facility in St. Louis, MO and Scott Air Force Base in Shiloh, IL until medically retired. His skills as a talented overall handyman included repairing lawnmowers, mechanic, restoring cars, carpentry, plumber, electrician, gardener, and master griller, always earned him high marks among his family and friends. He was a member of Trenton First United Methodist Church in Trenton, IL. On September 2, 2007 he married Carolyn Cole Fallon in Moscow Mills, MO among close family and friends. He leaves behind to mourn his passing, his loving and devoted wife of 11 years; children, Christopher (Christina) Norbeck of New Baden, Timothy (Jennifer) Norbeck of Taylorville, IL, Brian Norbeck of Peoria, IL, and Gerrick (Terri) Fallon of Indianapolis, IN, and Lamont Fallon and Catrese Fallon of Dallas TX; brothers, Thomas (Micky) of Stevensville, MT, and James (Tina) Carlyle, IL; sisters, Mary Norbeck of Pensacola, FL, and Eileen Cummings of Highland, IL; maternal aunt, Joanie Wiegmann of New Baden; sisters-in-law, Thanolia Hudson, Valerie (Charles) Kiel of Rock Island, IL, Gwendolyn Humphries of Chesterfield, VA, and Barbara Moore of Moscow Mills, MO; brothers-in-law, Dalton Cole of New Baden, and Michael Cole of Spencer, MA. Mr. Norbeck was a doting grandfather to his grandchildren, Taylor and Sydney Fallon of Belleville, IL, Elena and Isabel Hunt of Dallas, TX, Madison Norbeck of Breese, IL, Laney Norbeck of Taylorville, IL, Javon Scaggs Sr. and Devin Smith of Indianapolis, IN, and Owen Norbeck of Taylorville, IL; four great-grandchildren, Mylah Betts, Olivia Smith, and Cameron and Jovan Scaggs, Jr.; and a host of other relatives and friends. He was preceded in death by his parents, and a brother, Lawrence Norbeck. A “Celebration of Life” service will be held Saturday, September 28, 2019 at 4 p.m. at the Parks Chapel A.M.E. Church Fellowship, 4301 Baker Ave., Centreville, IL 62207. Private burial services will be held at Jefferson Barracks National Cemetery in St. Louis, MO. In lieu of flowers and plants, two memorials may be made to the Church Sunday Schools of Trenton United Methodist Church, 3324 Old U.S. Hwy 50, Trenton, IL 62293 or the Parks Chapel A.M.E. Church, 4301 Baker Ave., Centreville, IL 62207. The Norbeck family would like to express their thanks and gratitude to the St. Louis, MO Medical community consisting of both Veteran’s Administration Hospitals – Jefferson Barracks and John Cochran Medical Centers (Tele-Health), Com-Pact Clinics (Heart-Failure), Mercy, Barnes, and St. Louis University Hospital for their excellent treatment and care of their loved one. Special thanks to Nordike Funeral Home of New Baden, IL for their services.

John C. Norbeck, 66, of New Baden, passed away at his home on Thursday, August 15, 2019. He was born June 27, 1953 in Belleville, to the union of the late Albert Lawrence and Marie, nee Rensing, Norbeck. He had been a life-long resident of New... View Obituary & Service Information

The family of John C. Norbeck created this Life Tributes page to make it easy to share your memories.

Send flowers to the Norbeck family.