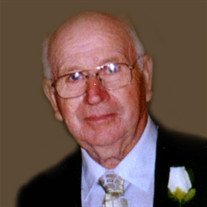 Jerome F. Heckenkemper, 85, of New Baden, Illinois, died August 26, 2019, at Aviston Countryside Manor after a brief illness. He was born March 25, 1934, in New Baden, the son of Bernard and Adeline "Addie" (nee Albers) Heckenkemper. He married Mary Ann Buss at St. Anthony Catholic Church in Lively Grove, on April 20, 1955, and she survives. In addition to his wife, Jerome is survived by his children, Linda Klostermann (Steve Verdeyen) of Albers, and Carol (Larry) Wolk of Columbia, IL; four grandchildren, Jim (Jill Klostermann of Highland, IL; Kevin Klostermann of Moberly, MO; Lynn (Louis) Boeckmann of Albers, IL; and Lori Blanchard (fiancé Jim Roepke) of St. Louis, MO; and ten great grandchildren: Nathan, Justin and Hailey Klostermann of Highland, IL; Madyson and Kendyl Klostermann of Moberly, MO; Kayla, Aften and Abby Boeckmann of Albers, IL; and Austin and Chase Blanchard of St. Louis, MO. He is also survived by a sister, Janet Thole, and brother-in-law, Leo Buss. In addition to his parents, Jerome was preceded in death by brothers-in-law Ben Thole, Linus Meier, Gregory Buss and Norbert Buss; sisters-in-law Cecelia Buss, Mary Ellen Buss, Dorothy Buss, and Bernadine Meier, and a great granddaughter in infancy, Ava Blanchard. Jerome was a devoted, husband, father and grandfather. He loved spending time with his family, and time with his grandchildren was especially cherished. He enjoyed sharing in their hobbies and shenanigans, helping with projects, etc. He was everyone’s grandpa, and to some a second father. Jerome was a retired farmer and led by example, teaching a strong work ethic and the value of fun and relaxation with family and friends. He loved to drive (it didn’t matter where), check out the crops or local auction, and somehow managed to find a McDonald’s along the way. He will be greatly missed. Funeral Mass of Christian Burial will be held at 10 a.m. on Saturday, August 31, 2019 at St. George Catholic Church in New Baden with Rev. Gene Neff officiating. Burial will follow at Resurrection Cemetery in New Baden. Friends may call from 6 p.m. until 8 p.m. Friday, August 30, 2019 and from 8 a.m. until 9:30 a.m. Saturday, August 31, 2019 at Nordike Funeral Home in New Baden. Memorials may be made to St. George Parish and will be received at the funeral home. Condolences may be sent to the family at www.nordikefuneralhome.com

The family of Jerome Heckenkemper created this Life Tributes page to make it easy to share your memories.

Send flowers to the Heckenkemper family.