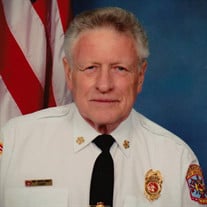 James H. Mahlandt, age 79, of Carlyle passed away on Tuesday, December 11, 2018 at his home. He was born in Carlyle on September 15, 1939, the son of Elmer and Gladys (Jones) Mahlandt. He married Helen Gross at the First United Methodist Church in Carlyle on September 21, 1963 and she survives in Carlyle. In addition to his wife, he is survived by two sons, Jim Mahlandt and wife Lesley of Centralia, and Scott and wife Cheryl of Hubert, North Carolina; four grandchildren, Austin, Braden, Meagan, and Alaina; three sisters, Barb (Joe) Gergley, Kay (Doug) Brown, Becky (Bill) Hughes; his in-laws, Louise Miller, Delma (Luis) Perez, Donna Perez, and Shirley Knue. As well as many nieces and nephews. Mr. Mahlandt was preceded in death by his mother and father, infant sister Linda, sister-in-law and brothers-in-law, Betty (Elmer) Thompson, Gilbert Miller, Julio Perez, Bob Knue, and Leonard Gross. Jim was a 32nd Degree Master Mason and the Shriners. He served as a Deputy for the Clinton County Sheriff’s Department where he worked for several years. He owned and operated Beckemeyer Building Supply from 1978 to 1988 He served as a Carlyle Township Trustee and on the Carlyle Cemetery Association. Jim joined the Carlyle Fire Protection District on December 12, 1960 and dedicated 58 years of service to the community (1960 – 2018). He served as Fire Chief for 43 of those years (1972-2015). Chief Mahlandt remained dedicated to his department and community, he could be found at the firehouse every morning at around 4:00 AM cleaning and checking trucks before going to work his full time job. In his free time he enjoyed hunting with his sons. Funeral services will be held 10:00 am on Saturday, December 15, 2018 at Nordike Funeral Home in Carlyle with Fr. George Mauck officiating. A private interment will take place at the Carlyle Township Cemetery. Visitation will be held on Friday, December 14, 2018 from 4:00 until 8:00 pm and on Saturday from 8:00 until the time of services. Scott Masonic Lodge 79 will conduct a ceremony with a Shrine walk through at 7:00 pm on Friday. Area fire departments will conduct a walk through at 7:15 PM on Friday followed by the Bell Ceremony from the Carlyle Fire Department. Memorials made in Memory of Jim are suggested to the Beckemeyer Methodist Church and will be received at Nordike Funeral Home in Carlyle.

James H. Mahlandt, age 79, of Carlyle passed away on Tuesday, December 11, 2018 at his home. He was born in Carlyle on September 15, 1939, the son of Elmer and Gladys (Jones) Mahlandt. He married Helen Gross at the First United Methodist Church... View Obituary & Service Information

The family of James H. Mahlandt created this Life Tributes page to make it easy to share your memories.

James H. Mahlandt, age 79, of Carlyle passed away on Tuesday,...

Send flowers to the Mahlandt family.