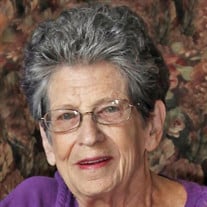 Irene C. Strieker, 84, of Albers, died Thursday, August 11, 2016 at her home. She was born December 5, 1931 in Germantown, the daughter of Louis & Mary (Robben) Schoendienst. She married Robert Strieker January 19, 1952 in Germantown and he... View Obituary & Service Information

The family of Irene C. Strieker created this Life Tributes page to make it easy to share your memories.

Send flowers to the Strieker family.