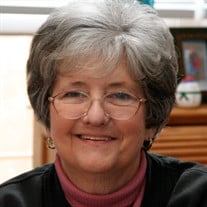 Helen G. Seibert, 77, of Trenton, IL, died Tuesday, January 2, 2018 at St. Joseph Hospital in Highland. She was born November 9, 1940 in New Baden, IL, the daughter of Herman and Catherine, nee Haar, Macke. She married Charles L. Seibert September 13, 1975 and he survives in Trenton. Also surviving are her children, Sherry (Becky) Brendel and Glenn (Kelly) Brendel, all of St. Louis, MO.; a sister, Jo Spear of Tallahassee FL; sisters-in-law and brothers-in-law, Mary Lou Seibert, Ruth Billhartz, and Wilmer (Phyllis) Seibert, all of New Baden, IL, and Bryan (Lydia) Seibert of Las Vegas, NV. In addition to her parents she was preceded in death by her father-in-law and mother-in-law, Wilmer & Bernice Seibert and brother-in-law, Pete Spear. Helen was a former seamstress at Marine Garment in Highland. She was a very creative person and in addition to sewing, she loved doing crafts, decorating cakes and playing guitar. She was humble about her many talents and shared them freely with others. Besides loving music, singing and dancing, Helen was an avid collector of dolls. She loved children and was a favorite baby sitter in town. She also loved animals and her pet dogs were never too far from her side. Funeral Services will be held at 11:30 a.m. Saturday, January 6, 2018 at Nordike Funeral Home in New Baden with Deacon John Fridley officiating. Burial will follow at Resurrection Cemetery in New Baden. Friends may call Saturday, January 6, 2018 from 9 a.m. until time of services at Nordike Funeral Home in New Baden. In lieu of flowers, memorials may be made to the Alzheimer’s Association and will be received at the funeral home.

The family of Helen G. Seibert created this Life Tributes page to make it easy to share your memories.

Send flowers to the Seibert family.