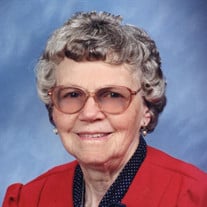 Helen E. Schneider, 95, of Mascoutah, died Friday, December 23, 2016 at Mar-Ka Nursing Home in Mascoutah. She was born December 19, 1921 in Mascoutah, the daughter of Clarence and Laura (Culli) Christ. She married Calvin H. Schneider on February 27, 1946 in New Baden and he preceded her in death on February 22, 1997. She is survived by a daughter, Evelyn (Myron) Renth of Mascoutah; three grandchildren, Andrew, Richard (Laura), and Susan Renth; three great-grandchildren, Madelyn, Juliet, & Jacob Renth; two sisters, Frieda Holcomb of Greenville and Erma Schier of Belleville; and a brother, George (Amy) Christ of Cabool, MO. In addition to her parents and husband, she was preceded in death by a sister, Dorothy Fries. Mrs. Schneider was a waitress and wedding cake maker. She was a member of the Bethel United Methodist Church in Mascoutah. Funeral services will be held at 11 a.m. on Tuesday, December 27, 2016 at Nordike Funeral Home in New Baden. Burial will follow at Greenmount Cemetery in New Baden. Friends may call from 10 a.m. until time of service on Tuesday, December 27, 2016 at Nordike Funeral Home in New Baden. Memorials may be made to the Mascoutah Animal Hospital and will be received at the funeral home.

The family of Helen E. Schneider created this Life Tributes page to make it easy to share your memories.

Send flowers to the Schneider family.