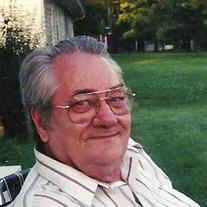 Glenn Shelby Oliver, 92, of Aviston passed away on Monday, May 15, 2017 at Aviston Countryside Manor. He was born in East St. Louis, Illinois on March 23, 1925 the son of John Quincy and Elsie (nee Kelley) Oliver. Glenn married Dorothy Rednour on November 27, 1946 in East St. Louis. He was preceded in death by his parents; his wife on August 12, 1996; a son, Gary Oliver; a daughter, Kathy Smith; 3 children in infancy, John, David and Nancy; special friend Babe Knipp, sisters, Laverne Duncan, Esther Rincon, and Dorothy Waldo; brothers-in-law and sisters-in-law, Robert Duncan, Manuel Rincon, William Waldo, Joseph (Buddy) Rednour, Audrey Rednour. He is survived by his daughters, Debra (Thomas) Thole, Sue (James) Olliges; son-in-law Robin (Smitty) Smith; Grandchildren Becky (Eric) Brown, Rhonda (Paul) Biver, Bill (Beth) Hegger; Justin Oliver, Kim (Jason) Hegger, Chelsey (Terry) Pollmann, Nicole (Caleb Weiss) Olliges, Nathan Olliges; Great-Grandchildren Alex, Jonah, Luke, Joey, Olivia, Alice, Brayden, Ryker, Kenna; sister, Mary Ellen Mayer; many loving nieces and nephews. Glenn served in the Navy in WW II and was involved in the invasion of Sicily. He was a television and VCR repairmen for most of his life. He loved working on cars, camping, and could fix pretty well anything. He always had a project going. He took his family on annual trips, showing us beautiful places like Colorado, the Grand Canyon, and Yellowstone National Park. He loved nothing more than pulling that camper around the country. Glenn was a loving father, grandfather and great-grandfather. Many times he helped his kids with broken microwaves, washers, TVs, cars. He had an inventive mind and held a US Patent for a timed recording device used in Grants stores in the 1970s. He instilled in his children and grandchildren a love of travel and how to enjoy learning new things throughout life. A Memorial Service will be held at 12:00 PM on Saturday, May 20, 2017 at Nordike Funeral Home in Aviston with Deacon Charlie Litteken officiating. Interment will follow at St. Francis Cemetery in Aviston. Visitation will be from 9:00 AM until the time of services at Nordike Funeral Home on Saturday. Memorials are suggested to the Intrepid Fallen Heroes Fund or St. Jude Children’s Hospital and will be received at Nordike Funeral Home. Online condolences can be left for the Oliver family by visiting www.nordikefuneralhome.com.

The family of Glenn S. Oliver created this Life Tributes page to make it easy to share your memories.

Glenn Shelby Oliver, 92, of Aviston passed away on Monday, May...

Send flowers to the Oliver family.