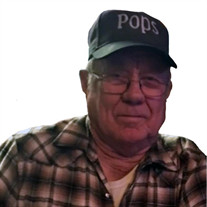 Gerald H. Kampwerth, age 84, of Marydale passed away on Monday, April 11, 2022, at Greenville Nursing and Rehab. He was born on July 28, 1937 in Wade Township, the son of Gerhard and Josephine (Rakers) Kampwerth. He married Linda Meyer on July 18, 1964 in Carlyle and she preceded him in death on May 19, 2009. In addition to his wife of 45 years and his mother and father, he was preceded in death by his son, Michael Kampwerth; siblings: Sister Veronica Kampwerth, Regina (Louis) Seiffert, Herman Kampwerth, Urban Kampwerth, Norbert (Alice) Kampwerth, Joe (Agnes) Kampwerth, Leonilda (Ray) Diekemper, JoAgnes (Wayne) Beckemeyer, and Cornelius “Bud” (Marcella) Kampwerth; in-laws: Rosemary Kampwerth, Rose Brassel, Mary (Bud) Hall, George (Rose) Meyer, Ed Meyer, Sissy (Eddie) Nichols, Nancy (Harold) Womble, and Margaret Ann Meyer. He is survived by his loving partner, Violet Turner; his children: Chris Kampwerth and wife Margo, Terry Kampwerth and wife Nicole, and Scott Kampwerth and wife Paula all of Carlyle; grandchildren: Danny Kampwerth and wife Drew, Jared Kampwerth, Jordan Gregory and wife Allison, and Keegan Kampwerth Gavin Kampwerth, Addison Kampwerth, Parker Kampwerth; four great grandchildren; two brothers: Frank Kampwerth and wife Lucille and Roland Kampwerth; his in-laws: Fred Meyer and wife Linda, Jim Meyer and wife Erika, Pam Meyer, and John Meyer and wife Sherry. Mr. Kampwerth was a member of St. Mary Catholic Church in Carlyle and a veteran of the United States Army. He was a member of the Beckemeyer Legion and Carlyle Knights of Columbus. Gerald worked at Middle West Freightways, BeMac and Fruehauf as a diesel mechanic for 30 years. He finished his career at Hazlet State Park, retiring in 2008. He enjoyed hunting and the comradery of having deer camp every year. This tradition he has passed on to his boys and grandkids. However you knew him, by pops, Uncle Gerald, 40 mile, he never met a stranger. As of April 11, 2022 Gerald was no longer one step ahead of Tom Frerker. A Funeral Mass of Christian Burial will be held at 11:00 AM on Tuesday, April 19, 2022 at St. Mary’s Catholic Church in Carlyle with Fr. George Mauck officiating. Interment will follow at St. Mary’s Cemetery in Carlyle. Visitation will be held on Monday, April 18, 2022 from 4:00 until 8:00 PM at Nordike Funeral Home in Carlyle and on Tuesday from 9:00 until 10:30 AM at Nordike Funeral Home in Carlyle. Memorials made in memory of Gerald are suggested to St. Mary Church or Greenville Nursing and Rehab and will be received at Nordike Funeral Home, 740 Fairfax Street, Carlyle, IL 62231.

Gerald H. Kampwerth, age 84, of Marydale passed away on Monday, April 11, 2022, at Greenville Nursing and Rehab. He was born on July 28, 1937 in Wade Township, the son of Gerhard and Josephine (Rakers) Kampwerth. He married Linda Meyer on July... View Obituary & Service Information

The family of Gerald H. Kampwerth created this Life Tributes page to make it easy to share your memories.

Gerald H. Kampwerth, age 84, of Marydale passed away on Monday,...

Send flowers to the Kampwerth family.