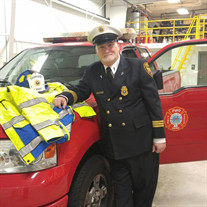 Gerald David “Jerry” Joyce, Jr., 63, formerly of New Baden, died Saturday, February 27, 2021 at Anderson Hospital in Maryville. He was born February 5, 1958 in Darby, PA, the son of Gerald David and Margaret, nee Wright, Joyce, Sr. Jerry is survived by his son, Gerald David Joyce III and his wife Amanda of Fairview Heights; six grandchildren, Liam, Athena, Kailee, Kaden, Callen, and Adalynn; a brother, Kevin Joyce; and a sister, Margie (Jim) Gallagher. In addition to his parents he was preceded in death by three brothers, Bill Joyce, John Joyce, and Ronald Collins. Gerald D Joyce, Jr. spent his entire life serving others. After growing up in the suburbs of Philadelphia, he started his public service career as a firefighter and EMT for East Lansdowne, PA. Jerry joined the Air Force in 1978 and served as a Medic for 4 years. It was this career change that brought him to Southern Illinois where he worked in police, fire, EMS, and eventually went to seminary school. Jerry has been serving as a chaplain in a hospital setting for the last several years. He has family spread far and wide, mostly because you did not have to be blood to be family. Jerry always had a helping hand and eager ear. He was a friend to everyone he met. Above all else he loved his children and grandchildren. His greatest joys were volunteering at Belleville Memorial, taking care of his grandchildren, and telling the epic stories of his life. Funeral Services will be held at 11 a.m. Friday, March 5, 2021 at Nordike Funeral Home in New Baden. Burial with full military honors will follow at Greenmount Cemetery in New Baden. Visitation will be held Friday, March 5, 2021 from 9 a.m. until time of services at Nordike Funeral Home in New Baden. Memorials may be made to the Down Syndrome Association of Greater St. Louis and will be received at the funeral home.

The family of Gerald David "Jerry" Joyce Jr. created this Life Tributes page to make it easy to share your memories.

Send flowers to the Joyce family.