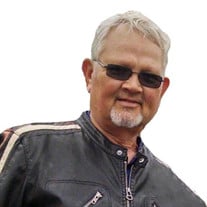 Gary L. Pryor, departed this life Thursday, July 30, in the comfort of his home with his loving wife. Gary was 65 years young and certainly young at heart. Gary lived life to the fullest, even while battling cancer for the last for 14 years. Gary's body was worn out, but his spirit lives on and is now free; free of pain, free of suffering, free of cancer. Gary enjoyed the simple things in life, like counting his big winnings after poker night with his best buddies – a whopping $6.20, playing air guitar and singing (even with his boss at work Christmas parties), showing off his fancy moves on the dance floor and experienced magical moments “Shazam” at the Blue Room. Gary had two favorite hobbies - riding his Harley Davidson and fishing. Gary and his wife occasionally took long motorcycle rides (all the way to Washington D.C.-best vacation ever), went on many poker runs, or just a scenic ride for the day. Gary especially enjoyed the times when his niece Brittany would ride with him on poker runs. Fishing was his other favorite past time. Gary would describe a “best day of his life” bringing home a big cooler full of fish, smiling ear to ear. Gary worked for several years at World Color Press in Salem and Clinton County Oil in Breese before finding his niche’ at Illinois Department of Transportation (IDOT) at the sign shop, striping the highways – (yep, even right over roadkill) and hanging signs. Gary enjoyed a 20 year career at IDOT, of which 13 years was while battling his cancer. Not only did Gary find a job he enjoyed and took great pride in but he found a second family at IDOT. Gary could have never continued working all of those years without the support and encouragement of his co-workers and bosses at IDOT. Gary proudly served in the U.S. Marine Corp from 1973 until 1977. Gary was a very active member of the American Legion Post 233 of Okawville serving as Treasurer and assisted calling bingo for several years. He was born on January 2, 1955 to Claude and Dorothy (Schulte) Pryor and he grew up in Carlyle. He first married JoAnn Gebke and they later divorced. Gary then married Ronda (James) Pryor on June 4, 1994 and she survives in Okawville. Left to mourn his passing is his daughter, Cara (BJ) Srogus; grandchildren: Cody, Savannah and Mackenzie; stepmother, Leona Pryor; mother-in-law, Dorothy James; sisters: Karen (Mike) Munyon, Tracy (Dave) Ackerman, Tammy Noto and friend Bob; brothers: Bob Pryor and fiancée Tammy, Dennis Pryor, Kevin Pryor; brother-in-law, Patrick (Tammy) Budds; sisters-in-law: Cindy Bobell and Heather Leek; also surviving is his aunt: Lula (Pryor) Drews; many cousins, nieces, nephews, and many great friends – some even with special nicknames such as Weirdo and Goofball. Gary was full of pride when speaking of his 3 beautiful grandchildren: Cody, Savannah and Mackenzie. He was grateful for the time he had watching the three of them grow into young adults. He was preceded in death by his father, mother, and father-in-law, David James. Visitation for Gary will be held from 3:30 until 6:30 PM on Wednesday, August 5, 2020 at Nordike Funeral Home in Carlyle with funeral services immediately following with Rev. Jason McIntosh officiating. Full military rights will be accorded. Memorials made in memory of Gary are suggested to the Patriot Guard and will be accepted at Nordike Funeral Home, 740 Fairfax Street, Carlyle, IL 6231.

Gary L. Pryor, departed this life Thursday, July 30, in the comfort of his home with his loving wife. Gary was 65 years young and certainly young at heart. Gary lived life to the fullest, even while battling cancer for the last for 14 years.... View Obituary & Service Information

The family of Gary L. Pryor created this Life Tributes page to make it easy to share your memories.

Send flowers to the Pryor family.