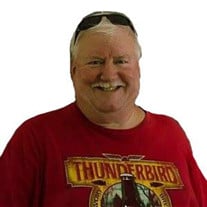 Gary G. Hilmes, age 60, of Trenton passed away on Saturday, September 15, 2018 at St. Joseph’s Hospital in Breese. He was born on September 18, 1957 in Highland, the son of Bernard and Carol (Orlet) Hilmes. He survived by two daughters: Heather Florczyk and husband Justin of Trenton, and Charity Fuehne and husband Roger of Aviston; four grandchildren: Aubrey and Amsey Florczyk, Savannah and Landen Fuehne; his father, Bernard “Bernie” Hilmes; six brothers: Dan Hilmes and wife Carol of Breese, Bob Hilmes and wife Peggy of Carlyle, Larry Hilmes and wife Marla of Carlyle, David Hilmes of Orlando, Steve Hilmes and wife Donna of Carlyle, Bruce Hilmes and wife Stacy of Carlyle; as well as his nieces and nephews: Jennifer(Gary) Towell, Jonathan “JD” (Vicki) Hilmes, Brian Hilmes, Christopher (Tara) Hilmes, Michael (Jessica) Hilmes, Lauren and Katelyn Hilmes, Ashley (Dustin) Minton, Ryan Hilmes and Matthew (fiancé Miranda) Hilmes, Bailey, Nathan and Natalie Hilmes. Gary was preceded in death by his mother, Carol Hilmes. Mr. Hilmes was an outdoorsman, he enjoyed fishing, hunting, golfing, and hanging out at his club house by the river. Gary founded Hilmes Distributing in Trenton in 1990, he started out operating out of his home and grew the business into what it is today. In his free time he enjoyed watching baseball and riding his Harley. He looked forward to time with his family. A Funeral Mass of Christian Burial will be held at 1:00 PM on Wednesday, September 19, 2018 at St. Mary’s Catholic Church in Carlyle with Fr. George Mauck officiating. Interment will follow at St. Mary’s Catholic Cemetery in Trenton. Visitation will be held from 9:00 AM until 12:30 PM on Wednesday, September 19, 2018 at Nordike Funeral Home in Carlyle. Expressions of sympathy in memory of Gary may be made to St. Mary’s Catholic Church in Carlyle and will be received at Nordike Funeral Home, 740 Fairfax Street, Carlyle, IL 62231.

Gary G. Hilmes, age 60, of Trenton passed away on Saturday, September 15, 2018 at St. Joseph&#8217;s Hospital in Breese. He was born on September 18, 1957 in Highland, the son of Bernard and Carol (Orlet) Hilmes. He survived by two daughters:... View Obituary & Service Information

The family of Gary G. Hilmes created this Life Tributes page to make it easy to share your memories.