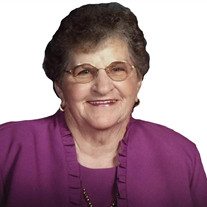 Garnell Evelyn Hugo, age 85, of Hoffman, passed away at her home on Thursday, January 24, 2019. She was born in rural Hoffman on February 19, 1933, the daughter of Harry and Viola (Ritimeier) Mattmiller. She married Alfred Hugo on September 9, 1950 and he preceded her in death on November 17, 2017. Mrs. Hugo is survived by her four children: Ramona Cushman of Centralia, Roxann Knuf of Carlyle, Rhonda (Lenny) Mackie of Carlyle, & Roger Hugo of Hoffman; ten grandchildren & sixteen great grandchildren; two brothers: Kenneth Mattmiller, Dwight Mattmiller and wife Katherine, two sisters: Marlene Joliff and husband Gail and Onie Reynolds as well as many nieces and nephews. In addition to her husband, Garnell was preceded in death by her parents, an infant daughter, Mary Margaret Hugo; her son-in-law, Steve Knuf; her grandson-in-law: Ken Fischer; sister: Loretta (Amos) Tyberendt; her in-laws: Wanda Myers, Jack Reynolds, Edgar (Fayola) Hugo, Herbert (Barbara) Hugo, Bernice (Clarence) Little and Lorraine (Edgar) Reinkensmeyer. Mrs. Hugo was a member of Trinity Lutheran Church in Hoffman. She served as the president to the ladies aid and volunteered countless hours through teaching Sunday school classes, vacation bible schools and assisting at Kaskaskia College. Garnell enjoyed baking, playing cards, reading, and helping her husband around the farm. She loved babysitting for her grandchildren and great grandchildren. Funeral services will be held at Trinity Lutheran Church in Hoffman on Monday, January 28, 2019, at 11:00 am with Pastor Perry Schefelker officiating. Burial will follow at Trinity Lutheran Cemetery in Hoffman. Visitation for Mrs. Hugo will be held on Sunday, January 27, 2019 from 3:00 until 6:00 PM at Trinity Lutheran Church in Hoffman and again on Monday from 9:00 AM until the time of services, also at the church. Expression of sympathy for the Hugo family are suggested to Trinity Lutheran Church and will be received at church or at Nordike Funeral Home, 740 Fairfax Street, Carlyle, IL 62231.

Garnell Evelyn Hugo, age 85, of Hoffman, passed away at her home on Thursday, January 24, 2019. She was born in rural Hoffman on February 19, 1933, the daughter of Harry and Viola (Ritimeier) Mattmiller. She married Alfred Hugo on September... View Obituary & Service Information

The family of Garnell E. Hugo created this Life Tributes page to make it easy to share your memories.

Garnell Evelyn Hugo, age 85, of Hoffman, passed away at her home...