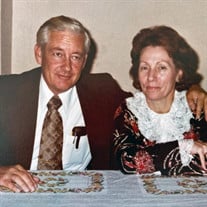 Fred Raymond Owens the first of five children, was born in Ozark, Arkansas April 2, 1924 to Myrtle and Raymond Owens. Dorothy Jean Owens the first of five children, was born in St. Louis, Missouri to Bertha and Earnest Morris May 12, 1930. Fred and Dorothy met on a blind date an evening on the Saint Louis Admiral Riverboat. He fell in love at first sight. Fred was enlisted in the U.S. Air Force and expected to be deployed to Europe. With the situation giving urgency, a three month courtship was enough for them to know they were committed to each other. Fortuitously WWII was coming to a conclusion and the number of men needed was reduced. Many were furloughed, Fred among them. He never had to leave his new bride. They moved to California and began their family which grew to two sons, Fred Raymond Owens Jr., Eric Monroe Owens, and two daughters Glee Thacker living in Selmer, TN and Ges Wheeler living in Carlyle, IL. Theirs was a marriage made in Heaven. They do good work there, so that union thrived for 74 years. Remember that hail, lightning, and thunder happen in heaven too. Their marriage withstood the storms because it was built on a sure foundation, the one Jesus Christ gave the instruction for. They both loved reading the Bible and valued its direction for living. Dorothy was a dedicated home maker. She exemplified the competent wife and mother. Her needlework was beautiful. She would have fought bears for her children. There was always hospitality at her table and home. Fred was gifted with many abilities and talents. He also loved God’s creation, plant and animal. He had a vineyard and made wine. He planted an orchard and enjoyed grafting several varieties of fruit on the same tree. He could shoe his own horses, make furniture, repair his own vehicles, build, wire, plumb, brick, roof houses, and play the fiddle for starts. There did not seem to be anything he could not do. Their great legacy was teaching their children God’s standards for living. They taught their children to think for themselves, not blindly follow the crowd and to have the courage to stand firm. Fred and Dorothy died together, one hour apart, Tuesday, December 15, 2020 at St. Joseph's Hospital in Breese. Memorial services will be held at a later date. Nordike Funeral Home in Carlyle is serving the Owens family. Online condolence may be left to Fred and Dorothy’s family by visiting www.nordikefuneralhome.com

The family of Fred and Dorothy Owens created this Life Tributes page to make it easy to share your memories.

Fred Raymond Owens the first of five children, was born in Ozark,...

Send flowers to the Owens family.