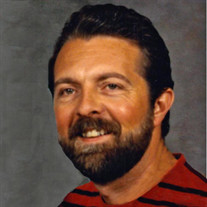 Frankie Wayne “Buddy” McIntosh age 65, of Centralia, died Tuesday April 7, 2020 after a long battle with cancer. Born May 7, 1954, the son of Frank McIntosh and Mary Lou (Trammel) Staffey. Frank is survived by his 5 sons, Jason and Amy McIntosh of Carlyle, Josh McIntosh of Granite City, Corey Shane and Dawnita McIntosh of Tell City IN, Aaron and Danica McIntosh of Carlyle, Ryan and Kacie McIntosh of Carlyle, and 14 grandchildren. He is also survived by his siblings, Cheryl and Max Lutrell, Marilynn and Robert Martin, Marsha Trammel, Jim and Christina Trammel, and Brian McIntosh. He was preceded in death by his grandparents, Harry and Toleta Bradley, his parents Frank and Mary Lou, and daughter Amy Beth Legrand. Frank was a Brakeman for Illinois Central Railroad and owner of Mac Motors Auto Sales and Detail Shop in Centralia. A baseball man at heart, Frank was an avid Cardinals fan; he played many years in County League baseball, and served as the all-time pitcher for the Cherry Street backyard Whiffle Ball League. Known to his family as Frankie Wayne, his friends as Buddy, and his children as Pop. Frank was a diehard Elvis fan who loved yard sales, popsicles, fudge bars, peeps, and a cold glass of milk. But most of all he loved watching his children and grandchildren play sports. Private graveside services will be held at Carlyle Township Cemetery. A public celebration of life will be scheduled at a later date. Nordike Funeral Home in Carlyle is assisting the family. Online condolences may be sent to the McIntosh family by visiting www.nordikefuneralhome.com.

The family of Frankie McIntosh will plan a public celebration of life service at a later date when it is safe for us all to gather together again.

Send flowers to the McIntosh family.