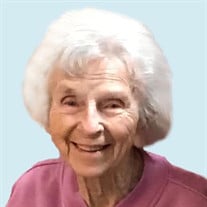 Frances “Fritz” Imming, 98, of Aviston, Ill. died on Friday, May 22, 2020 at Aviston Countryside Manor. Mrs. Imming was born on November 4, 1921, in Beckemeyer, Illinois the daughter of Anthony and Barbara (Baltruszis) Armonaitis. She married B. A. “Butch” Imming on October 1, 1940, in Beckemeyer, Ill. and he preceded her in death on June 7, 2002. She is survived by her three sons, Tom Imming and wife Dale of Oxnard, Calif., Jerry Imming and wife Barb of St. Louis, Mo., and Dan Imming and wife Carol of Aviston, Ill.; one daughter, Fritzie Imming of Brentwood, Mo.; 10 grandchildren, Kristine West (Scott Annable), Kimberlee Winzen, Ruston (Jacey) Imming, Patrick (Jen Oliver) Imming, Colton (Katie) Imming, Christopher (Abby) Imming, Graham (Carly) Imming, Cody (Kylie) Imming, Cassie (Tyler) Shaw, and Tanner Imming (special friend Morgan McEvers); and 13 great-grandchildren, Kalee, Paeten, Katie, Will, Parker, Rylen, Harris, Reid, Claire, Henry, Samuel, Londyn, and Leo; and one great great granddaughter, Aurora. In addition to her husband, she was preceded in death by her mother and father, four sisters, Juliana Armonaitis, Mary Yasaitis and husband Frank, Josephine Vietmeier and husband Ervin, Bertha Perez and husband Frank; and four brothers, Anthony Armonaitis, Benedict “Benny” Armonaitis, Bill Armonaitis and Joe Armonaitis; great granddaughter, Lara Timmermann, father-in-law and mother-in-law Herman and Josephine, nee Groene, Imming and brothers-in-law and sisters-in-law Olivia “Leafy” and Ted Sydow, Genevieve “Jen” and Bill Brown, Hermina Imming (Sister Hermana PHJC), Cornell and Evelyn Imming, Victoria and Elmer “Happy” Wolters, Wendell and Clementine Imming, Robert and Loretta Imming, Cyril “Jake” and Jo Anne Imming, and Dolores and Don Muehlbach, Fritz was the youngest of 9 children. At age 17, while still in high school, her mother died. Shortly thereafter, her father, a coal miner, became ill. Since all of her siblings had moved out of the house by that time, Fritz decided to discontinue her high school education so that she could care for her father. She worked as a waitress to keep the household running. Occasionally, she went with friends to the Lakeside dance hall just outside of Beckemeyer where she eventually met her husband, Butch. After getting married in 1940, she moved her ailing father into her farm house, just south of Aviston, where she and Butch lived. She began to raise a family while caring for her father, and working alongside her husband on the farm. After her father died in 1946, she began to assist her husband in his new insurance business while they still both worked the farm. In 1951, she and Butch moved their family off the farm into her current home in Aviston. She continued to help in the insurance business in an office in their home. Soon after, she accepted a position as school treasurer for Aviston High School. She also became the school treasurer for the 7 Catholic/Public elementary schools that fed in to Aviston Community High School District #71. In 1970, Fritz, as the school treasurer, accompanied her husband, Butch, who was the secretary to the school board, and high school superintendent Bob Astroth to Chicago so that she could sign the necessary bonds for the construction of Central Community High School District #71 as it was transitioning from Aviston Community High School District #71. She continued as school treasurer for Central High School for a few years after that. She continued working at Imming Insurance Agency until retirement. Fritz was a 4-H leader in Aviston for a few years. She was a “Lifetime Member”of the Centralia Moose Lodge 1219. In her past time she enjoyed quilting, playing the card game “Pitch” (especially with her in-laws Jake & Jo Anne Imming), and playing the card game “Nertz” with her grandkids. She was an avid sports fan. She was well known for her love of the Aviston Aces baseball team in the Clinton County League where her husband was a player, then manager, and her 3 sons played. She regularly attended basketball games for the Aviston Eagles, both grade school and high school, and the Central Cougars. One of her most beloved sports was bowling, as she was a regular for the Fuehne’s Tavern ladies bowling team, and in her later years was a regular in the Tuesday afternoon ladies bowling league at Ten Pin Bowl in Carlyle. She continued to bowl past 80 years of age. She and Butch enjoyed regular trips to Ellis Park horse racing in Henderson, KY in the months of July & August each summer. They also enjoyed travelling to Las Vegas. After her husband’s death in 2002, she continued to attend Keno tournaments at the Fremont Hotel & Casino 3-4 times each year as she and Butch had developed new friendships during their trips to Nevada. Fritz was known for her positive attitude, her sense of humor, her hospitality, her fondness to have a good time, her concern for others and her charitable soul. She was a devout Catholic, regularly attended mass, had a talent to pray 2 rosaries at a time, and prayed for everyone she knew. She really loved her grandchildren. Private funeral services will be held at Nordike Funeral Home in Aviston with Deacon Charlie Litteken officiating. Interment will follow at St. Francis Cemetery in Aviston. A Memorial Mass will be scheduled for a later date. Memorials made in Memory of Fritz are suggested to Central Community High School Athletic Department, Aviston Volunteer Fire Department, or Aviston Countryside Manor and will be received at Nordike Funeral Home in Aviston.

The family of Frances "Fritz" Imming created this Life Tributes page to make it easy to share your memories.

Send flowers to the Imming family.