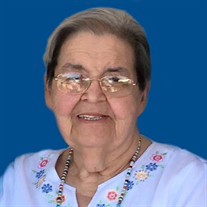 Evelyn Doloris “Peaches” Reynolds, 84, of Carlyle, died Wednesday, June 14, 2017 at the Villas at St. James in Breese, IL. She was born July 3, 1932 in Carlyle, IL, the daughter of Lawzenis “Dode” and LeDora “Dodie”, nee Meier, Taylor. She married Willis “Jr” Reynolds on July 12, 1952 in Arkansas, and he preceded her in death September 13, 2007 She is survived by her five daughters, Cathy (John) Vander Pluym of St. Louis, MO, Shirley (Dan) O’Loughlan of Decatur, IL, Marilyn (Tim) Scharlemann and Brenda (Terry) Souza all of Anchorage, AK, and Doris (Gordon) Johnson of St. Louis, MO; six grandchildren, nine great-grandchildren; special friend, Amy Wilkinson of Carlyle, IL; and her beloved cat, Mum. In addition to her parents and husband she was preceded in death by brothers-in-law and sisters-in-law. Mrs. Reynolds retired from Farmers & Merchants Bank in Carlyle as a bank officer. She was a member of St. Mary Parish in Carlyle; she enjoyed making jewelry, painting, and ceramics. Evelyn was a seamstress extraordinaire, read voraciously, was an all-around crafty person, and never met a stranger. Funeral Services will be held at 11 a.m. on Saturday, June 17, 2017 at Nordike Funeral Home in Carlyle with Rev. George Mauck officiating. Burial will follow at St. Mary Cemetery in Carlyle. Friends may call from 4 p.m. until 8 p.m. Friday, June 16, 2017 and again on Saturday, June 17, 2017 from 9 a.m. until time of service at Nordike Funeral Home in Carlyle. Memorials may be made to Pulmonary Fibrosis Foundation or the Ronald McDonald House and will be received at the funeral home.

The family of Evelyn Doloris "Peaches" Reynolds created this Life Tributes page to make it easy to share your memories.

Send flowers to the Reynolds family.