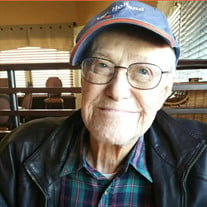 Eugene Schubert, 95, of New Baden, died on Friday, May 10, 2019 at HSHS St. Elizabeth’s Hospital in O’Fallon. He was born February 29, 1924 in Wheatfield TWP, Carlyle, son of Clarence and Helen (Hasting) Schubert. He married Corrine Flannigan in Rockford, IL and she preceded him in death. He then married Mary M. Bohannen September 29, 1990 in New Baden and she preceded him in death April 12, 2010. He is survived by two daughters, Loretta Schubert and Cynthia (Richard) Porter, both of Centralia; two sons, Robert (Francine) Schubert of Miami, FL, and Michael (Kimberly) Schubert of Belleville; two step-daughters, Linda Binns of St. Louis, MO and Janice Coker of Belleville;grandchildren: Christopher, Ariel, Brittany, Cody, Josie, Hannah, Zack, and Dylan ; one step-granddaughter; five step grandsons; one great-grandson, Braden; a sister, Bonnie Burnett of Carlyle; and two brothers, Donald Schubert, and Gary Schubert, all of Carlyle; as well as many nieces and nephews. In addition to his parents and wives, he was preceded in death by a step-daughter, Marsha Biesemeyer; and his brothers:Rev. Veryl Schubert, Harold Schubert Mr. Schubert was a Fieldman for Furst-McNess Co. for 20 years and a WWII veteran of the United States Navy where he served in the construction battalion, better known as the Seabees. He was a member of the First Baptist Church in New Baden and served as a Deacon, Sunday School Teacher and Nursing Home Ministries. Eugene cared about everyone and never met a stranger. He loved traveling and socializing. He always put God first in his life. Funeral services will be held at 10 a.m. on Wednesday, May 15, 2019 at First Baptist Church in New Baden with Rev. Dave Manley officiating. Burial will follow at Greene Cemetery in Millersburg. Visitation will be held on from 9:00 until 10:00 a.m. on Wednesday, May 15, 2019 at First Baptist Church in New Baden. Memorials may be made to the First Baptist Church Building Fund in New Baden and will be received at Nordike Funeral Home, 15 East Hanover Street, New Baden, IL 62265.

The family of Eugene Schubert created this Life Tributes page to make it easy to share your memories.

Send flowers to the Schubert family.