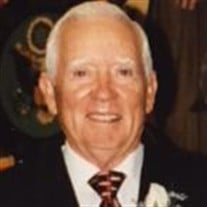 Eugene “Gene” L. Laux, 90, of New Baden, IL, and recently living at Garden Place Assisted Living in Waterloo, IL, since March 1st, passed away on January 5, 2018 at Red Bud Regional Hospital. Gene was born on September 5, 1927, in Clinton County, IL, then moved to Mascoutah Township at age one. He attended Ruth School and Mascoutah High School. Gene was a veteran of WWII, serving as a Medic stationed in Peiping, China at the Army, Navy, and Marine Hospital. Gene was a professional Firefighter at Scott Air Base for 26 years and then for 7 years at the Melvin Price Support Center in Granite City. He also served as a volunteer member and Chief of Summerfield Fire Dept. and as the President of Clin/Clair Firemen's Association. After moving to New Baden, Gene worked as an EMT and volunteered for the New Baden Ambulance Service in the 1980's. Gene is a member of St. John's UCC in Summerfield, American Legion Post 321 in New Baden, VFW Post 7983 of Trenton, and a past member of the New Baden and Summerfield Lion's Clubs, O'Fallon Bass Casters and the Illinois Bass Anglers. Surviving are his wife, Pauline, nee Rieger, whom he married on October 7,1950, at St John's UCC, Summerfield, his son Kurt E. (Kim) Laux, New Baden, and daughters Alice (Roger) Imhof of Waterloo and Sarah (Arthur) Goodin of Bloomfield, MO. Gene's grandsons are Arthur and Jacob Goodin, Nathan and Benjamin Pier, Kyle Laux and Chad Satterfield. He is also survived by 8 Great-grandchildren and sisters-in-law Carolee Kelly, Sarasota, FL, and LaVerne Laux, New Baden. Gene was preceded in death by his parents, Gustav and Estella Laux, his brothers, Raymond, Howard, Russell and Donald, and his sisters, Althea Mehl and Ethel Kimmle. Memorial Services will be held at 11 a.m. Wednesday, January 10, 2018 at Nordike Funeral Home in New Baden. Burial with full military honors will follow at Greenmount Cemetery in New Baden. Friends may call Wednesday, January 10, 2018 from 10 a.m. until time of service at Nordike Funeral Home in New Baden. Memorials may be made to the American Legion Post 321, New Baden, or St. John's UCC, Summerfield, or Helping Strays of Monroe County, IL, and will be received at the funeral home.

The family of Eugene "Gene" L. Laux created this Life Tributes page to make it easy to share your memories.

Send flowers to the Laux family.