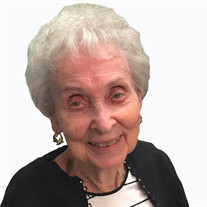 Elinor L. Zahn, 95, of Trenton, died Wednesday, March 31, 2021 at Trenton Village. She wasborn June 29, 1925 in Trenton, daughter of Ben and Alvina (Jahn) Strotheide. She marriedCharles Zahn on October 26, 1944 at St. Mary Catholic Church in Trenton and he preceded her in death on August 31, 2015. Elinor is survived by her children, Robert C. (Angie) Zahn, Mary L. (Richard) Klein, all of Trenton, and Carol J. Schneider of Chesterfield, MO; grandchildren, Joel (Victoria) Zahn, Jennifer Zahn,Tim (Kerrie) Klein, Tammy (Bryan) Courtney, Todd (Stephanie Tonnies) Klein, and Tom Klein; great-grandchildren, Jacob Zahn, Maddison Zahn, Chelsea (Levi)Thomas, Michael Klein, Brandon Courtney, Taylor Courtney, Jordan Courtney; one great-great grandchild, Maycee Thomas; andnieces and nephews. In addition to her parents and husband, she was preceded in death by her brothers and sisters-in-law, Sid & Laverne Strotheide, and Eugene & Nancy Strotheide; a sister and brother-in-law,Jane & Dennis (Dempsey) Davis, brothers and sisters-in-law, Lois(Harold) Wessel and Rosemary(Bernard) Lengermann, and a son-in-law, Neil Schneider. Elinor led the Wesclin marching band in high school. After graduation she worked in St. Louis until getting married in 1944, a marriage that would last over 70 years. She traveled to California with her naval aviator husband, and when he shipped out, she returned to Trenton to raise her family. She was very adventurous for a small town girl and enjoyed traveling and seeing the world. Elinor was always ready for a good game of anything, be it golf, tennis or cards. She was a member of St. Mary Church and Altar Sodality, the Trenton Women’s Club and many card clubs. Mostly she enjoyed spending time with her family and many friends. Memorial Mass of Christian Burial will be held at 11a.m. on Friday, April 9 th at St. Mary Church in Trenton with Fr. Joseph Rascher officiating. Burial will follow at St. Mary Cemetery in Trenton. Friends may call from 9a.m. until time of service at 11a.m. at St. Mary Church in Trenton. Memorials may be made to St. Mary Church or HSHS Hospice of Southern Illinois. Condolences may be sent to the family at www.nordikefuneralhome.com.

The family of Elinor L. Zahn created this Life Tributes page to make it easy to share your memories.

Send flowers to the Zahn family.