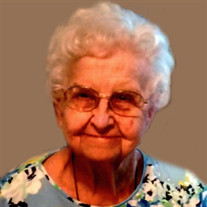 Eleanor M. Huegen, 97, of Albers, died peacefully Sunday, November 10, 2019 at her home. She was born November 2, 1922 in Lively Grove, the daughter of Anton and Catherine, nee Dingwerth, Behrmann. She married Delmond H. “Del” Huegen October 29, 1947 in Albers and he preceded her in death May 23, 2004. Eleanor is survived by her children, Dale (Cynthia) Huegen of O’Fallon, Diane Korte of Albers, Gladys (Barry) Abbott of Trenton, Bradley (Ann) Huegen of Albers, and Carleen (Paul) Weber of Edwardsville; 12 grandchildren; and 11 great-grandchildren. In addition to her parents and husband, she was preceded in death by a son-in-law, Marcel Korte. Mrs. Huegen was a homemaker. She was a member of St. Bernard Parish and Altar Sodality, and the American Legion Post 1026 Auxiliary in Albers. Eleanor enjoyed quilting, dancing, and spending time with her family. A Funeral Mass of Christian Burial will be held at 10:30 a.m. Friday, November 15, 2019 at St. Bernard Catholic Church in Albers with Rev. Anthony Onyango officiating. Burial will follow at St. Bernard Cemetery in Albers. Friends may call Friday, November 15, 2019 from 8:30 a.m. until 10:15 a.m. at St. Bernard Catholic Church in Albers. Memorials may be made to St. Bernard Parish, for Masses, or to the charity of the donor’s choice and will be received at the church or Nordike Funeral Home, 15 E. Hanover St., New Baden, IL 62265 who is serving the family.

The family of Eleanor M. Huegen created this Life Tributes page to make it easy to share your memories.

Send flowers to the Huegen family.