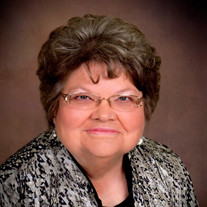 Eileen Mary Toennies, 78, of Albers, died Tuesday, May 16, 2017 at St. Joseph Hospital in Breese. She was born November 5, 1938 in Damiansville, the daughter of Henry and Clara, nee Ratermann, Zurliene. She married Elmer Leo Toennies January 19, 1960 in Breese and he preceded her in death on March 2, 1976. She is survived by her children, Angela (special friend, Edward Kuper) Holbrook of Edwardsville, Kelly (Lee) Deiters of Albers, and John (Kristi) Toennies of Aviston; seven grandchildren, Jason (Cassandra) Deering, Adam Holbrook, Nicholas (Ashley) Deiters, Danielle Deiters, and Connor, Landon, and Ethan Toennies; two great-grandchildren, Parker & Kameron Deering; her siblings, Kathleen Ripperda of Breese, Rita (James) Horstmann of New Baden, Lavern (Ethel) Zurliene of Beckemeyer, and Phyllis (Robert) Dumstorff and Carol (David) Hummert all of Breese; two sisters-in-law, Lorraine Zurliene of Breese and Mary Holtz of Ashley; special family friends, Vernon & Ann Mohesky of Breese; and many nieces & nephews. In addition to her parents and husband she was preceded in death by a brother, Cornelius Zurliene; brothers-in-law and sisters-in-law, Robert Ripperda, Sister Mary Clare Toennies, Gerhard Toennies, Helen & Joseph Patke, Margaret & Elmer Kehrer, Anne & Frank Szopinski, Leo Holtz, Delores & Art Kniepmann, and Sister Bernadette Toennies; and special family friends, Richard & Bernadine Kussatz. Mrs. Toennies retired after over 20 years as a CNA from St. Joseph Hospital in Breese. She was a past president of the American Legion Post 1026 Auxiliary in Albers, a member of St. Bernard Parish and ladies sodality, and was also a PSR teacher for many years. Eileen was a volunteer for Meals on Wheels for many years, as well as a volunteer at Aviston Countryside Manor. She was a counselor/advisor for her family and enjoyed being with her children and grandchildren. Funeral Mass of Christian Burial will be held at 10 a.m. Friday, May 19, 2017 at St. Bernard Catholic Church in Albers with Rev. Anthony Onyango and Deacon Glenn Netemeyer officiating. Burial will follow at St. Bernard Cemetery in Albers. Friends may call Thursday, May 18, 2017 from 4 p.m. until 8 p.m. and again on Friday, May 19, 2017 from 8 a.m. until 9:45 a.m. at St. Bernard Catholic Church in Albers. Memorials may be made to St. Bernard Parish, St. Joseph Hospital, or Mater Dei and will be received at the church or Nordike Funeral Home, 15 E. Hanover, New Baden, IL 62265 who is serving the family.

The family of Eileen M. Toennies created this Life Tributes page to make it easy to share your memories.