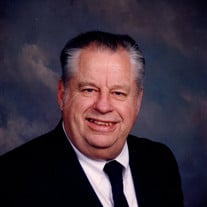 Edward Johnson, 88, of New Baden, died Friday, December 24, 2021 at HSHS St. Joseph Hospital in Highland. He was born January 27, 1933 in Albers, the son of William and Anna, nee Schulte, Johnson. He married Jeanette Wolters July 21, 1953 in Aviston and she survives in New Baden. In addition to his wife of 68 years, he is survived by a daughter, Doris (Jerry) Goodwin of Trenton; a daughter-in-law, Phyllis Johnson of Mascoutah; grandchildren, Brent (Jessica) Rakers, Jackie (Berti) Campos, Nikki (Mark) Knobeloch, Kelli (Allen) Gilbert, Jason (Danielle) Johnson, Lisa (Gary) Fertig, and Melissa (Jarrod) Zwetow; 20 great-grandchildren with one on the way; he is also survived by Maryann Youngbluth, Ada & Harold Friedrick, and Virginia Johnson. In addition to his parents he was preceded in death by two sons, Ronald Johnson and Rick Johnson. Edward was a veteran of the United States Navy, and a retired painter where he worked side by side with his son, Rick. He was a 63 years lifetime member and past commander of the New Baden American Legion Post 321 and a life member of the Catholic War Veterans. All services are private. Memorials may be made to the American Legion Post 321 and will be received at Nordike Funeral Home, 15 E. Hanover St., New Baden, IL 62265 who is serving the family.

The family of Edward Johnson created this Life Tributes page to make it easy to share your memories.

Send flowers to the Johnson family.