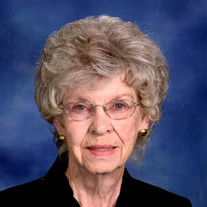 Edna C. Wellen, 87, of Aviston, died Friday, April 14, 2017 at Aviston Countryside Manor. She was born December 19, 1929 in Aviston, the daughter of Henry J. and Josephine C., nee Markus, Wellen. Edna is survived by a sister, Jeanette (Norbert) Haake of Belleville, a sister-in-law, Dolores Wellen of Aviston; and nieces, nephews, great-nieces, and great-nephews. In addition to her parents she was preceded in death by her siblings, Edmund Wellen, Ruth J. Wellen, Bernard Wellen, and Regina B. Wellen. Ms. Wellen was a secretary at Burns Buick in St. Louis. She was a member of St. Francis Parish and also sang in the funeral choir. She enjoyed working jigsaw puzzles, gardening, and the polka club. Funeral Mass of Christian Burial will be held at 10 a.m. Tuesday, April 18, 2017 at St. Francis Catholic Church in Aviston with Rev. Dan Friedman officiating. Burial will follow at St. Francis Cemetery in Aviston. Friends may call Monday, April 17, 2017 from 4 p.m. until 8 p.m. and again on Tuesday, April 18, 2017 from 8 a.m. until 9:30 a.m. at Nordike Funeral Home in Aviston. There will be a prayer service at 4 p.m. Monday at the funeral home. Memorials may be made to St. Francis Parish Building Fund and will be received at the funeral home.

The family of Edna C. Wellen created this Life Tributes page to make it easy to share your memories.

Send flowers to the Wellen family.