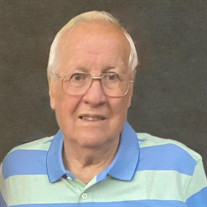 Having led a good life, Edmund C. Jansen, 91, of Albers, entered into eternal rest with his wife of 66 years by his side on Friday, February 4, 2022. He was born December 16, 1930 in Albers, the son of William and Margaret, nee Kloeckner, Jansen.... View Obituary & Service Information

The family of Edmund C. Jansen created this Life Tributes page to make it easy to share your memories.

Send flowers to the Jansen family.