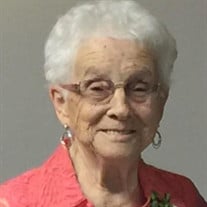 Dorothy B. Schroeder, 94, of Germantown, died Friday, September 10, 2021 at Breese Nursing Home. She was born January 27, 1927 in Breese, the daughter of Theodore and Anna, nee Bruns, Hemann. She married Edward J. Schroeder May 4, 1948 at... View Obituary & Service Information

The family of Dorothy B. Schroeder created this Life Tributes page to make it easy to share your memories.

Send flowers to the Schroeder family.