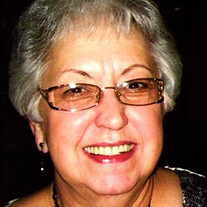 Donna R. Schulte, 72, of Trenton, IL, died Monday, February 5, 2018 at her home. She was born June 2, 1945 in Alton, the daughter of Ross and Vera, nee Trantham, Nesler. She married Marvin D. Schulte on July 30, 1966 at St. Bernard Catholic Church in Wood River, IL and he preceded her in death on October 28, 2014. She is survived by her children, Debbie (Dennis) Nordmann of Trenton, IL and Michael D. (Chelsa) Schulte of Summerfield, IL; eight grandchildren, Kyle (Brittany) Nordmann, Amy (Scott) Kaltenbronn, William, Emily, and Tyler Nordmann, Alex (Lacey) Schulte, and Allison and Andrew Schulte; great-granddaughter, Skylar Kaltenbronn and she was anticipating the birth of another great-granddaughter, Rylie Rae Kaltenbronn in March; her siblings; Janet Hunt of Wood River, IL, Larry & Joyce Nesler and Jack & Mary Nesler all of East Alton, IL, and Lisa Nesler of Chesterfield, MO; brothers-in-law and sister-in-law, Dennis & Cathy Schulte of Trenton, IL and Ray Colgin of Oklahoma; and many nieces and nephews. In addition to her parents and husband she was preceded in death by a brother, Scott Nesler; a sister-in-law, Ellyn Jane Colgin; a brother-in-law, John Hunt; a nephew, David Schulte; and a niece, Jacqueline Schwehr. Mrs. Schulte was a homemaker. She loved spending time with family and friends, going shopping, and you could always find her eating at Good Ol’ Days Restaurant in New Baden. Funeral Mass of Christian Burial will be held at 10 a.m. on Friday, February 9, 2018 at St. Joseph Catholic Church in Lebanon with Rev. Gene Neff officiating. Burial will follow at St. Joseph Cemetery in Lebanon. Friends may call from 4 p.m. until 8 p.m. Thursday, February 8, 2018 and from 8 a.m. until 9 a.m. Friday, February 9, 2018 at Nordike Funeral Home in New Baden. Memorials may be made to St. Joseph Parish Memorial Fund or St. Jude’s Children’s Research Hospital and will be received at the funeral home or church.

The family of Donna R. Schulte created this Life Tributes page to make it easy to share your memories.

Send flowers to the Schulte family.