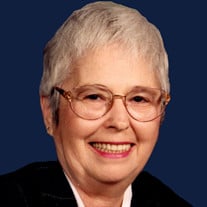 Donna Rae Billhartz, 83, of New Baden, passed away on Saturday, January 27, 2018 at Clinton Manor Living Center in New Baden. She was born on January 24, 1935 in Audubon, Iowa, the daughter of Freddy and Jane (Carper) Clark. She married Stuart A. Billhartz on September 14, 1968 in Kansas City, Missouri and he preceded her in death on August 20, 2002. Donna is survived by two daughters: Cindy Saving of Kansas and Rae (Greg) Lodes of New Baden; five grandchildren: Jenny Saving, Justin (Laci) Saving, Christin (Caleb) Fankhauser, Joey (Heather) Lodes, and Janie (Kyle) Baer; eight great grandchildren: Lindsey Faustlin, Julia Fankhauser, Grady Lodes, Kennedy Lodes, Ryder Lodes, Katey Baer, Kade Baer, and Avitt Saving; sisters-in-law: Andrea (Hershel) Wright and Cindy Enser; as well as many nieces and nephews. In addition to her mother, father, and husband she was preceded in death by her son, John Howard; her nephew and god son, Scott Billhartz; mother and father-in-law, Arthur and Vernell Billhartz, brother-in-law, Wayne Billhartz and sister-in-law, Eurlene Haas. Mrs. Billhartz was a member of the New Baden Methodist Church, New Baden American Legion Auxiliary, and the New Baden Lions Club. Donna worked as a bank teller at First County Bank in New Baden for many years. She enjoyed knitting and playing bingo and poker with her family and friends. The Billhartz family would like to thank the staff of Clinton Manor and Hospice of Southern Illinois for their care and assistance through this difficult time. Funeral services will be held at 11:00 AM on Tuesday, January 30, 2018 at Nordike Funeral Home in New Baden with Pastor Lisa Wiedman officiating. Interment will follow at Greenmount Cemetery in New Baden. Visitation will be held on from 6:00 until 8:00 PM on Monday, January 29, 2018 and Tuesday from 9:00 AM until the time of services at Nordike Funeral Home in New Baden. In lieu of flowers and other gifts the family suggests memorials be made in memory of Donna to Hospice of Southern Illinois or the Clinton Manor Activity Fund and will be received at Nordike Funeral Home, 15 East Hanover Street, New Baden, IL 62265. Online condolences may be left for the Billhartz family by visiting www.nordikefuneralhome.com

Donna Rae Billhartz, 83, of New Baden, passed away on Saturday, January 27, 2018 at Clinton Manor Living Center in New Baden. She was born on January 24, 1935 in Audubon, Iowa, the daughter of Freddy and Jane (Carper) Clark. She married Stuart... View Obituary & Service Information

The family of Donna Rae Billhartz created this Life Tributes page to make it easy to share your memories.

Donna Rae Billhartz, 83, of New Baden, passed away on Saturday,...

Send flowers to the Billhartz family.