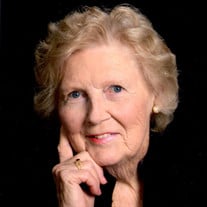 Dolores Wellen, 86, of Aviston, died Sunday, November 26, 2017 at St. Elizabeth Hospital in O’Fallon. She was born November 2, 1931, the daughter of Lawrence and Frances, nee Boeckmann, Beckmann. She married Edmund Wellen May 30, 1950 in Germantown and he preceded her in death on January 30, 2009. Dolores is survived by her children, Janice (Virgil) Straeter of Highland, and James (Diane) Wellen of Aviston; four grandchildren, Renee (Mark) Steinmann, Eli (Janell) Straeter, Staci (Darrell) Strawbridge, and Holly (Matt) Albers; great-grandchildren, Michaela & Jacob Steinmann, Rhett Straeter, Maliah & Landon Strawbridge, and Eliana Albers; two brothers, Virgil Beckmann and Robert (Rebecca) Beckmann; sisters-in-law and brothers-in-law, Jenny & Norbert Haake, Henrietta & Ben Koch, and Jeanette Beckmann; and numerous nieces & nephews. Welcoming her in heaven were her parents, husband, her grandson, Michael Wellen; two brothers, Paul and Ralph Beckmann; sisters-in-law and brother-in-law, Ruth J. Wellen, Bernard Wellen, Regina B. Wellen, Edna C. Wellen, and Marilyn Beckmann. Dolores was a farmer’s wife and loving mother. She worked alongside her husband to build their life together. She continued to work on the farm with her son and cared for Ed for 19 years after his accident. Dolores was a member of St. Francis Parish in Aviston; she enjoyed farming, sewing, baking, and being around her grandchildren and great-grandchildren. Funeral Mass of Christian Burial will be held at 10 a.m. Thursday, November 30, 2017 at St. Francis Catholic Church in Aviston with Rev. Dan Friedman officiating. Burial will follow at St. Francis Cemetery in Aviston. Friends may call Wednesday, November 29, 2017 from 4 p.m. until 8 p.m. and again on Thursday, November 30, 2017 from 8 a.m. until 9:30 a.m. at Nordike Funeral Home in Aviston. There will be a prayer service at 4 p.m. Wednesday at the funeral home. Memorials may be made to Mater Dei High School or St. Francis Parish Improvement Fund and will be received at the funeral home.

The family of Dolores Wellen created this Life Tributes page to make it easy to share your memories.

Send flowers to the Wellen family.