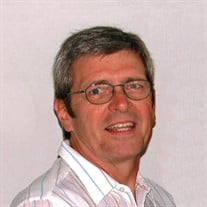 Dennis Theodore Woltering was born October 8, 1947 at St. Joseph’s Hospital in Breese, IL, the son of Edward F. and Elizabeth “Alice” (Sprehe) Woltering. Dennis passed away at his home surrounded by his loved ones on Thursday, January 13, 2022. Dennis married the love of his life, Diane Hawkins, on June 29, 1985. In addition to his wife, he is survived by his children: Jeff (Nancy) Woltering, Shelly (Tom) Albers, Matt (Amy) Woltering, and step-son Travis Hill; seven grandchildren: Kaitlyn (special friend Jaron Seiffert), Kaylee, and Shawn Albers, Brock Woltering, Hannah, Madisyn, and Austin Woltering, and one great granddaughter, Ava Seiffert. He is also survived by two sisters: Carol McKinney and Shirley (Gary) Detmer, and 2 sister-in laws: Judy Riggs and Leslie Hawkins along with many nieces and nephews. Dennis was proceeded in death by a granddaughter, Alyssa Woltering, his father, mother, sister: Diane Kahrhoff, father & mother-in-law: Richard and Evelyn Hawkins, brothers-in-law: Stan McKinney, Herb Kahrhoff and Mike Hawkins, and sisters-in-law: Shirley Muggleston and Darla Hawkins. After attending Aviston Grade School and Aviston High School (class of 1965), Dennis worked as a carpenter for Bernard Huelsmann Construction. He volunteered for the draft with the Army, doing basic training and AIT at Fort Hood, Texas before being sent to Vietnam at Long Binh during the Tet Offensive of 1968. After returning to the states, Dennis joined his father at E.F. Woltering Welding Service. After his dad’s retirement Dennis bought the welding business, known as Woltering Welding and Manufacturing Service, where he worked until his retirement in 2009. Upon his retirement he sold the business to his son Jeff, making it a 4 generation business. He currently was the owner of Aviston Self Storage. Dennis believed in volunteering to help wherever he could. He had served as an Aviston Volunteer Fireman for several years. He was a member of the Aviston Jaycees, serving as internal Vice President. He spent many years coaching women’s softball for Foodland and then Zobrist Market. He helped reorganize the Scouting program in Aviston where he served as Cub Scot Committee Chairman, Boy Scout Committee Chairman and Unit Commissioner. He went on to serve as Camp Joy Camp Master, helping build the lifeguard tower, floating dock, Joe Woltering Chapel, rifle range and much more. He served the Crooked Creek District as Advancement Chairman, Charted Scot Representative, and Committee Member. And for Okaw Valley Council he was on the Council Properties Committee. Dennis was a member of the Aviston American Legion Post 1239 and the Vietnam Veterans Chapter 269. He was also a member of the Patriot Guard, who escorts military members and veterans to their final resting place. Dennis has served as military Honor Guard for funerals representing the Legion, Vietnam Veterans Chapter, and the Clinton County Honor Guard. He served as co-chairperson for Aviston’s Sesquicentennial to bring the Vietnam Traveling Memorial Wall to the event and then two years later he helped the Carlyle Corps of Engineers bring the wall to Carlyle Lake’s 150th year celebration. Dennis spent his retired years babysitting, hunting and fishing with his grandkids, who he adored, doing maintenance jobs at the Legion, driving for his son’s business, helping do jobs for his children, riding his Harley, riding his bike daily, and playing pool and golf with his friends. In 2015, he played the Nashville Municipal Golf Course for the first time and on the 2nd hole he scored a hole-in-one, it just so happened to also be his birthday that day. He was very proud of that shot and passed that challenge on to his children for them to top. He was known for his sense of humor and funny jokes. Funeral services will be held at 11:00 AM on Friday, January 21, 2022 at St. Francis Catholic Church with Deacon Charlie Litteken officiating. Burial with full military honors will follow at St. Francis Catholic Cemetery in Aviston. Visitation will be held from 4:00 until 8:00 pm on Thursday, January 20, 2022 at Nordike Funeral Home in Aviston and on Friday from 9:00 until 10:45 am at Nordike Funeral Home in Aviston. In lieu of flowers and other gifts, memorials in memory of Dennis are suggested to Aviston American Legion, Jared Burke Foundation, or the Vietnam Veterans Chapter 269 and will be received at Nordike Funeral Home, PO Box, 157, Aviston, IL 62216.

Dennis Theodore Woltering was born October 8, 1947 at St. Joseph&#8217;s Hospital in Breese, IL, the son of Edward F. and Elizabeth &#8220;Alice&#8221; (Sprehe) Woltering. Dennis passed away at his home surrounded by his loved ones on Thursday,... View Obituary & Service Information

The family of Dennis Theodore Woltering created this Life Tributes page to make it easy to share your memories.

Send flowers to the Woltering family.