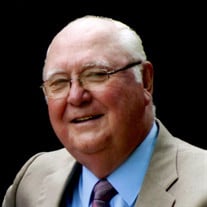 Dennis H. Toennies, 83, of Albers, died Monday, April 18, 2022 at Aviston Countryside Manor. He was born July 4, 1938 in Albers, the son of Martin and Leona, nee Wobbe, Toennies. He married Patricia Trankle May 27, 1964 at St. Boniface Catholic Church in Germantown and she survives in Albers. In addition to his wife he is survived by his children, Penny (Craig) Etter of Albers, Kim Skrob of Jackson, MO, Curt (Crissy) Toennies of Albers, and Deron (Andrea) Toennies of Bartelso; nine grandchildren, Casey (Patrick) Thole, Adam (Alycia) Etter, Alex (special friend, Grace) Skrob, Dalton Skrob, Jacob & Mallory Toennies, and Grace, Charlie, & Sophie Toennies; a brother, Ron (Sue) Toennies; and a brother-in-law, Danny Billhartz. In addition to his parents he was preceded in death by two sisters, Darlene Billhartz and Marilyn Toennies. Mr. Toennies was a procurement officer at Scott Air Force Base before his retirement in 1995. He was a veteran of the United States Navy where he was stationed at Pearl Harbor and Japan before his honorable discharge in 1960. Dennis was a member of St. Bernard Parish in Albers, the American Legion Post 1026, and the Knights of Columbus. He enjoyed bowling, golfing, playing cards, and watching his grandchildren’s sports games. In his younger years, Dennis played baseball in Japan while stationed there, and in later years played for the Clinton County Baseball League. Funeral Mass of Christian Burial will be held at 10 a.m. Thursday, April 21, 2022 at St. Bernard Catholic Church in Albers with Rev. Steven Beatty officiating. Burial will follow at St. Bernard Cemetery in Albers. Visitation will be held Wednesday, April 20, 2022 from 5 p.m. until 7 p.m. and again on Thursday, April 21, 2022 from 8:30 a.m. until 9:45 a.m. at St. Bernard Catholic Church in Albers. Memorials may be made to Mater Dei High School and will be received at the church or Nordike Funeral Home, 15 E. Hanover St., New Baden, IL 62265 who is serving the family.

The family of Dennis H. Toennies created this Life Tributes page to make it easy to share your memories.