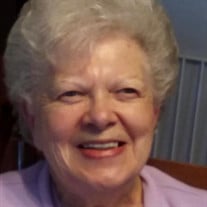 Deloris “Dee” May Knight, 88, of Mascoutah, died Monday, November 1, 2021 at her home. She was born April 29, 1933 in Olney, the daughter of William and Evelyn, nee Bunn, Thomson. She married Donald R. Knight February 19, 1951 in Olney and he preceded her in death on September 25, 2011. Dee is survived by her daughters, Donna Knight and Denise (Norm) Knight-Droll; five grandchildren, Alyson Hampton, Zach Swaim, Cathlen Carter, Colten Carter, and Piper Lee; and a sister, Betty Manning. In addition to her parents and husband she was preceded in death by an infant daughter, Carol Ann Knight; a brother, William “Bill” Thomson; brothers-in-law and sister-in-law, Jack Manning, Bert & Marcella Broster and Robert Knight. Mrs. Knight was a homemaker, dental assistant, and realtor. She enjoyed shopping and spending time with her grandchildren. Funeral Services will be held at 10 a.m. on Friday, November 5, 2021 at Nordike Funeral Home in New Baden. Burial will follow at Mascoutah City Cemetery. Visitation will be held from 9 a.m. until time of services at Nordike Funeral Home in New Baden. Memorials may be made to the Alzheimer’s Association and will be received at the funeral home.

The family of Deloris "Dee" May Knight created this Life Tributes page to make it easy to share your memories.

Send flowers to the Knight family.