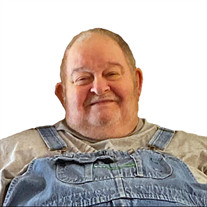 David L. Brandt, age 76, of Sandoval passed away on Tuesday, March 30, 2021 at St. Elizabeth’s Hospital in O’Fallon. He was born on March 31, 1944 on the family farm in Posey, IL the son of Ernest and Sofia (Foster) Brandt. He married Vicky Brandt on October 31, 1998 at the Free Methodist Church in Centralia and she preceded him in death. In addition to his wife, he was preceded in death by two sons: Darin Brandt and Marty Brandt; his brother, Bill Brandt and wife Verena; as well as his sister, Reda Lappe and husband Bob. David is survived by his children: Derrick Brandt and wife Roseann of Sandoval, Dujuana Morris and husband Stephen of Centralia, Misty Stoffel and husband Donald of Carlyle, Lindsay Brandt of Centralia, and Susan Purcell and husband Geff of Salem; daughter-in-law, Jamie Brandt of Carlyle; twenty-six grandchildren and seven great-grandchildren: a brother, Jimmy Brandt and wife Elsie of Carlyle; and many nieces and nephews. Mr. Brandt was a veteran of the United States Army. He worked at General Motors for 30 years before his retirement. He enjoyed traveling on small road trips to try different places to eat. He loved spending time with his children and grandchildren, taking side by side rides with his beloved dog, squirrel hunting, and spending time at his clubhouse. He lived by the strict theory that if you weren’t 20 minutes early, you were late, and he was definitely early for everything. Visitation will be held from 3:00 until 6:00 PM on Saturday, April 3, 2021 followed by a memorial service beginning at 6:00 PM at Nordike Funeral Home in Carlyle. Interment will take place at the Posey Cemetery at a later date. Memorials made in memory of David are suggested to the Clinton County Humane Society and will be received at Nordike Funeral Home, 740 Fairfax Street, Carlyle, IL 62231.

The family of David L. Brandt created this Life Tributes page to make it easy to share your memories.

Send flowers to the Brandt family.