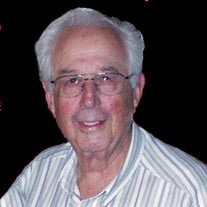 Dale F. Wade, 87 of Breese passed away on Saturday, July 14, 2018 at Aviston Countryside Manor. He was born on May 16, 1931 in Breese, the son of Edward and Frances (Monken) Wade. He married Marianne Hamers in Wiesbaden, Germany on November 27, 1954 and she survives in Breese. In addition to his wife of 63 years, he is survived by two daughters: Gail Wade (John Henss) of Breese and Renee (special friend Ronnie Bell Jr.) Wade-Foehner of Breese; his grandchildren: Bailey (Paul) Rinella, Max (fiancée Karen Korte) Luksetich, Jenee (Ryan) Mitchell, and Maria (special friend Nick Tannahill) Foehner; great-grandchildren: James and Luke Rinella and Alexander Mitchell; his sister, Ruth (James) Timmermann of Beaver Prairie; and cousins: Edward Monken of Stolletown, Jackie Gerstner of Breese, Carolyn Crocker of Carlyle, Dolores Sanders of Centralia, Jim Huehne of Wilmington, NC, Evelyn Mann of Effingham, JoAnn Raley of Chicago and Mary Ellen Raley of Henderson, NV. He was preceded in death by his mother and father, a sister and brother-in-law, Betty & Bud Campbell; mother-in-law and father-in-law Juliana and Heinz Hamers; brother- in-law, Heinz Hamers II, and sister-in-law, Gertrude Booth. Dale was the third generation of the Wade family business, Clinton County Oil Company and the founder of the Shell CC Food Marts convenience stores. He continued to remain active in the businesses until early 2018. The Shell CC Food Marts were an extension of his family. Always a supporter who was actively involved in his community, Mr. Wade served as president and active member of the Breese Lions Club (62 years), Breese American Legion (63 years), Breese Chamber of Commerce, Breese Historical Society, Sangers Club. One of Dale’s proudest achievements was being a founding board member for what is now Kaskaskia College. Many of Mr. Wade’s business associations were also long-standing relationships. He was recognized for 68 years with Shell Oil and served on several Wholesaler Councils. Dale was treasurer of Illinois Petroleum Marketers Association/Illinois Convenience Stores Association for 15 years and a long-time member. The Greater St. Louis Oil Men’s Club counted him in their membership for nearly 40 years. Dale’s time in the US Air Force (1950-54) brought him some of his fondest memories as he would often recall being a part of the first Management Analysis under Eisenhower during the occupation. A Celebration of Life Service will be held at 2:00 PM on Thursday, July 19, 2018 at St. Dominic Catholic Church in Breese with Deacon Linus Klosterman officiating. Interment will take place at St. Dominc/St. Augustine Cemetery at a later date. In lieu of flowers and other gifts, memorials are suggested to Breese Jaycee Park or to the charity of donor’s choice and will be received at church or at Nordike Funeral Home in Breese. Online condolences may be made to the Wade family by visiting www.nordikefuneralhome.com

Dale F. Wade, 87 of Breese passed away on Saturday, July 14, 2018 at Aviston Countryside Manor. He was born on May 16, 1931 in Breese, the son of Edward and Frances (Monken) Wade. He married Marianne Hamers in Wiesbaden, Germany on November... View Obituary & Service Information

The family of Dale F. Wade created this Life Tributes page to make it easy to share your memories.

Send flowers to the Wade family.