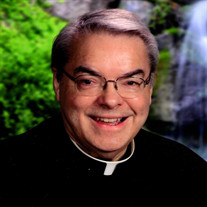 Fr. Dale Maxfield, 68, of New Baden and formerly of Waterloo, Fairmont City, Radom, Scheller, Centralia, and Sandoval, died Friday, April 16, 2021 at his residence. He was born August 4, 1952 in Breese, the son of Calvin F. “Cal” and Alice Mary, nee Lodes, Maxfield. Fr. Dale is survived by his mother, Alice Maxfield of Trenton; his children, Dale (Hannah) Maxfield, II of Lenexa, KS, Sarah (Steve) Maxfield-Grote of Brooklyn, NY, Joseph (Hanna) Maxfield of Los Angeles, CA, John (Amber) Maxfield of St. Louis, MO, and Mary (Melissa) Maxfield-Anderson of St. Louis, MO; six grandchildren, Beatrix, Neil, Theo, Naomi, Anakin, and Alister. He was preceded in death by his father, Calvin Maxfield. After attending St. George Grade School, Fr. Dale attended St. Henry Seminary in Belleville from 1966 -1970. After that he went on to Our Lady of Angels Seminary in Quincy, IL and became a Franciscan Brother with the Order of Friars Minor. He left the seminary in 1974 to marry Jane Deken in 1976 and had five children. Fr. Dale received his master’s degree in theology from St. Louis University in 1981, then served the Diocese of Belleville as the Director of Adult Education and various parishes as DRE, Pastoral Associate, and Parish Life Coordinator. As a Cathechist, he had articles published in Religion Teachers Journal and Catechist and Pace Magazines and also taught for a while at Aquinas Institute of St. Louis University. After his marriage ended, he attended Kenrick Seminary in St. Louis and Sacred Heart Seminary and School of Theology in Hales Corners, WI. Fr. Dale was ordained a Deacon in 2009, and served at Holy Rosary Parish in Fairmont City, IL. He was ordained a Priest in 2010 and was the associate pastor at SS. Peter and Paul in Waterloo, Administrator of St. Michael in Radom and St. Barbara in Scheller; and then Pastor of St. Mary in Centralia and St. Lawrence in Sandoval. He served on the Presbyterian Council after ordination and then on the Priests’ Personnel Board. Fr. Maxfield always felt blessed to be both a father of children and a Father in the priesthood. Funeral Mass of Christian Burial will be held at 10 a.m. Tuesday, April 20, 2021 at St. George Catholic Church in New Baden with Rev. Gene Neff officiating. Burial will follow at Resurrection Cemetery in New Baden. Mass is limited to 125 people. Please register at https://stgeorgefamily.org/events/EventSelection Visitation will be held Monday, April 19, 2021 from 4 p.m. until 8 p.m. and again on Tuesday, April 20, 2021 from 9 a.m. until 9:45 a.m. at St. George Catholic Church in New Baden. There will be a Rite of Reception at 4 p.m. Monday. In lieu of flowers, memorials may be made to https://gofund.me/d438d43b and will be received at the church or Nordike Funeral Home, 15 E. Hanover St., New Baden, IL 62265 who is serving the family.

The family of Fr. Dale Maxfield created this Life Tributes page to make it easy to share your memories.

Fr. Dale Maxfield, 68, of New Baden and formerly of Waterloo,...

Send flowers to the Maxfield family.