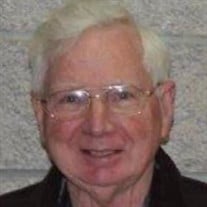 Curtis R. Williams, 78, of Belleville, died Saturday, December 12, 2020 at Missouri Baptist Hospital in St. Louis, MO. He was born December 5, 1942 in Paron, AR, the son of Harold and Lois, nee Curtis, Williams. He married Dolores High June 3, 1962 in Little Rock, AR and she survives in Belleville. In addition to his wife he is survived by a daughter, Lyn (Rob) Morris of Belleville; a granddaughter, Danielle (Ryan) Wallace; a step-sister, Bonnie Clarke; a step-brother, Graham Clarke; a nephew, Josh Dutton; an aunt, Carolyn Hartsfield; and a cousin, Mike (Dee Dee) Curtis. In addition to his parents he was preceded in death by his sister, Sandi Dutton. Mr. Williams was an electrical engineer for over 30 years at Southwestern Bell/ATT. As a professional, he was meticulous in researching the subject matter with which he was tasked. At 13 he became an amateur radio operator with the call sign W5DTR, among others. He took pride and pleasure in helping the district maintain their radio equipment. He was a past trustee for Stookey Township; and was among the many people who believed in the Road District and rolled up his sleeves in service of its residents. He was an amateur meteorologist who stayed up during weather events to alert the road crews about the behavior of the storm and reported road hazards. Curtis joined the Signal Hill Fire Protection Association on January 5, 2006 after visiting the fire house on the insistence of his granddaughter Dani. His desire to help was peaked and he saw he was able to help his community by joining the Fire Protection Association. Curtis became a member of the Board of Directors and his knowledge with communications systems quickly became a focus as he worked to understand and enhance a problematic paging system. Curtis also volunteered his time as a member of the Illinois Transportable Emergency Communications System. His knowledge again was valuable in not only keeping the equipment in a constant state of readiness, but he deployed as a communications specialist during a flooding event in Hardin Illinois. Another passion for Curtis was the weather. He made sure the Fire Department was kept aware of impending storms, tracked the amount of moisture that accumulated in the gauge at the firehouse and reported it to the National Weather Service, and helped to ensure that the Severe Storm Warning sirens in the district were ready and tested on a monthly basis. Somehow, Curtis found even more time and became the Treasurer for the Fire Protection Association. He spent hours signing checks and reviewing invoices, preparing financial documents and federal returns, researching where the Association could earn the most for its money, and ensuring for the financial stability of the Association. Curtis truly made an impact during his 15 years with the Signal Hill Fire Protection Association. Curtis was a true steward of the community in every aspect in which he found to serve and help. His dedication, knowledge, and most certainly his friendship will be missed by all who have ever met him. A Celebration of Life will be held at a later date. Memorials may be made to the Signal Hill Fire Department and will be received at Nordike Funeral Home, 15 E. Hanover St., New Baden, IL 62265 who is serving the family.

The family of Curtis R. Williams created this Life Tributes page to make it easy to share your memories.

Send flowers to the Williams family.