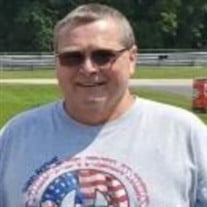 Not sure what to send?

Craig S. Krieger, 60, of Huey, died Saturday, May 7, 2022 at St. Joseph Hospital in Breese. He was born June 6, 1961 in Breese, the son of Lester and Pat, nee Falbe, Krieger. In addition to his mother, Pat Krieger of Huey; he is survived by his brother, Corky and friend Nick of Lebanon; brother, Joe and wife Barb, and niece Hollie of Copperas Cove, TX; and his Huey Hounds, Lulu, Cleo, Reba, and Kaiser. In addition to his father he was preceded in death by his infant brother, Dale Krieger; his step-mother, Carolyn Krieger; step-sister, Tammy; grandparents, Bob & Violet Falbe, and Alvin & Henrietta Krieger. Craig never knew a stranger and was quick to share a fresh mess of fish or fresh garden vegetables. An expert bingo player, Craig would be the one to call to save you a seat at the table. Craig was also the one to reach out to the “Card Gang” for the Friday/Saturday game nights. “Bring the Snicky Snacks!” Craig’s favorite time of the year was the spring, where he could get outside to go mushroom hunting and fishing. This was the time of year he also would get his garden going. There was nothing Craig loved more than fresh tomatoes, potatoes and corn from his garden. One of Craig’s passions was to cook. With help from his brothers, he would cook for 5 to 100 at the family fish fry. He also enjoyed watching his uncle Jim Falbe drag race. He followed Team Dart Zaster wherever they raced. Craig worked at Wee Walker Shoes and was one of the first to start at Pulsar Plastic in Carlyle. His last job was at Aviston Lumber in Carlyle. His silly smile and laugh will be missed by everyone who knew him. A Memorial Service will be held Saturday, July 2, 2022 at 1 p.m. at Nordike Funeral Home in Carlyle. Interment will follow at St. Mary's Catholic Cemetery in Carlyle. Memorials may be made to the Clinton County Animal Shelter or to the charity of the donor’s choice and will be received at the funeral home.

Craig S. Krieger, 60, of Huey, died Saturday, May 7, 2022 at St. Joseph Hospital in Breese. He was born June 6, 1961 in Breese, the son of Lester and Pat, nee Falbe, Krieger. In addition to his mother, Pat Krieger of Huey; he is survived by... View Obituary & Service Information

The family of Craig S. Krieger created this Life Tributes page to make it easy to share your memories.