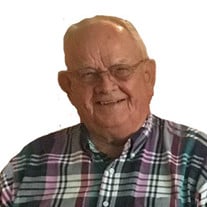 Cornelius “Bud” J. Kampwerth, age 89, of Carlyle passed away on Monday, February 10, 2020 at his home surrounded by his loving family. He was born on August 16, 1930 in Wade Township the son of Gerhard and Josephine (Rakers) Kampwerth. He married Marcella Krebs on September 28, 1954 and she preceded him in death on August 31, 2017. Mr. Kampwerth is survived by his children: Darlene (Don “Bone”) Linton of Carlyle, Randy (Lyn) Kampwerth of Edwardsville, and Carla (Jeff) VonderHaar of Carlyle; his son-in-law, John (Kim) Hudspeth of Aviston; nine grandchildren: Tim (Jessica) Hudspeth, Blake Hudspeth (fiancé Maddy Mensing), Joe Linton, Jared Linton (special friend Rachel Valenza), Paul, Joel, and Lia Kampwerth, Austin and Alex VonderHaar; two great grandchildren, Arabella and Tyler Hudspeth; his siblings: Frank (Lucille) Kampwerth, Roland (Rosemary) Kampwerth, Gerald Kampwerth (special friend Viola); his in-laws: Ray Diekemper of Carlyle, Lucile Krebs of Carlyle, Audrey Krebs of Carlyle, Alberta Kampwerth of Hillsboro, Mildred Kapp of Carlyle, and Edna (Edward) Holthaus of Beckemeyer. In addition to his wife, Bud was preceded in death by his parents, his daughter, Phyllis Hudspeth on December 7, 2004; his siblings: Sister Veronica Kampwerth, Regina (Louis) Seiffert, Herman Kampwerth, Urban Kampwerth, Norbert (Alice) Kampwerth, Joe (Agnes) Kampwerth, Leonilda Diekemper, and JoAgnes (Wayne) Beckemeyer; in-laws: Linda Kampwerth, Elmer, Eugene and Henry Krebs, and Wilfred Kapp. He served in the United States Army and was a veteran of the Korean War. From November 15, 1951 until April 22, 1952 he spent 16 weeks in light and heavy infantry training. In May of 1952 he went overseas to Germany until October 15, 1953 where he spent time with the heavy artillery. He drove the biggest artillery the army had. It had an 8 inch gun with a 15 foot barrel. After returning home he worked at the Moran Shoe Factory for 16 years and then became a truck driver for Bellm Trucking in Highland and then Churchill Truck Lines. He spent 30 years driving a semi, 7 years over the road and 23 years around the city of St. Louis. He was a member of St. Mary’s Catholic Church in Carlyle, serving 6 years on the parish council and overseeing the cemetery since 2002. He was also a member of Teamsters Local 50 for 7 years, Teamsters Local 600 for 23 years, the Knights of Columbus Carlyle Council 1382, Catholic War Veterans, Catholic Fraternal Life, Carlyle V.F.W. Post 3523 and Holthaus-Kampwerth American Legion Post 1227 and served on both funeral honor guards since 1963. He enjoyed working the VFW, Carlyle Legion, Beckemeyer Legion, and Carlyle KC Hall bingo games. Mr. Kampwerth was a kind, generous and faithful man who lived by the rules of 1st love God, 2nd love family, and 3rd love country. He enjoyed hunting and fishing but most of all he loved spending time with his family. A Funeral Mass of Christian Burial will be held at 10:00 AM on Saturday, February 15, 2020 at St. Mary’s Catholic Church in Carlyle with Fr. George Mauck officiating. Burial will follow at St. Mary’s Cemetery in Carlyle with full military rights accorded. Visitation will be held from 3:00 until 7:00 PM on Friday, February 14, 2020 at Nordike Funeral Home in Carlyle and on Saturday from 8:00 until 10:00 AM at St. Mary’s Catholic Church in Carlyle. The Carlyle Knights of Columbus, Council 1382, will pray the rosary beginning at 7:00 PM at St. Mary’s Church in Carlyle. In Lieu of flowers and other gifts memorials can be made in Bud’s memory to St. Mary’s Catholic Church and will be received at Nordike Funeral Home, 740 Fairfax Street, Carlyle, IL 62231.

The family of Cornelius "Bud" Kampwerth created this Life Tributes page to make it easy to share your memories.

Send flowers to the Kampwerth family.