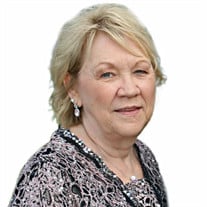 Corla A. Schaefer, 74 of Aviston, IL died on Tuesday, January 26, 2021 at St. John's Hospital in Springfield, IL with her Family by her side. She was born on February 15, 1946 at home in Damiansville, IL the daughter of John "Jack" & Bernadine M. (Wellen) Schaefer. She was a homemaker while caring for her daughter, Rhonda. She worked as a clerk for the Clinton County Clerk’s Office, she retired in February 2010 with 23 years of employment. After retirement, Corla enjoyed the majority of her time with her family, grandchildren and great grandchildren. Attending their sporting events and many other activities was always her first priority. She was their number one fan. She loved to teach her grandchildren and great grandchildren how to bake and sew. She also took great pride in caring for her father, Jack. She enjoyed traveling and going out with her great group of friends where they shared many laughs and memories to last a lifetime. She took pride in her faith and always prayed for anyone in need. She was a member of St. Francis Parish and American Legion Post 1239 Auxiliary. She is survived by her daughter, Rhonda (Mike) O'Brien of Aviston, IL; grandchildren: Kyle O'Brien of Aviston, IL, Sarah O’Brien of Aviston, IL, Nathan O'Brien (special friend Torey Borkowski) of Aviston, IL and Megan (Kjeld) Torkelson of Morris, IL; great Grandchildren: Harper O'Brien and Nora O'Brien of Aviston, IL. Also surviving are her brothers: Donald (Becky) Schaefer of Swansea, IL, John Schaefer of Ellington, MO; Randall Schaefer of Belleville, IL; Leslie "Les" Schaefer of Greenville, IL; and sister, Cynthia (Peter) Johnson of Cocoa, FL, along with many nieces and nephews. She is preceded in death by her children: Rodney and Renee Toennies; her parents, Jack and Bernandine Schaefer and sister, Dianne Podzamsky. A Memorial Mass of Christian Burial will be held at 10:00 A.M. on Saturday, February 6, 2021 at St. Francis Catholic Church in Aviston with Fr. Dan Freidman officiating. Interment will follow at St. Francis Catholic Cemetery in Aviston. Visitation will be held from 5:00 until 7:00 P.M. on Friday, February 5, 2021 at Nordike Funeral Home in Aviston. Memorials made in memory of Corla are suggested to St. Francis Catholic Church or Aviston Elementary School and will be received at Nordike Funeral Home, 301 South Clinton Street, Aviston, IL 62216.

Corla A. Schaefer, 74 of Aviston, IL died on Tuesday, January 26, 2021 at St. John's Hospital in Springfield, IL with her Family by her side. She was born on February 15, 1946 at home in Damiansville, IL the daughter of John "Jack" & Bernadine... View Obituary & Service Information

The family of Corla A. Schaefer created this Life Tributes page to make it easy to share your memories.

Corla A. Schaefer, 74 of Aviston, IL died on Tuesday, January...

Send flowers to the Schaefer family.