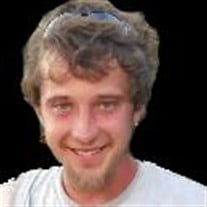 Corey Dale Brand, 25, of New Memphis, died Monday, August 22, 2016 at St. Elizabeth Hospital in Belleville. He was born July 4, 1991 in New Memphis, the son of Gary and Ruth Ann “Rufus” (Kennedy) Brand. In addition to his father, Corey is survived by his special friend, Anna Jade; his daughter, Onyx Ruth Brand; his lifelong friend, Marc Wilson; his grandparents, James & Micki Kennedy, Marleen Brand and Marjorie Missy; two uncles, Sean Kennedy and Roy Missey; aunts, Taffy Bequette, Tracy Denton, and Dawn Conrad; and he is also survived by numerous friends. Corey is preceded in death by his mother, Ruth Ann “Rufus” Brand on June 10, 2007; and an aunt, Sandra Acton. Mr. Brand was a roofer. He enjoyed playing guitars, r/c airplanes, and drawing. Corey was loving, kind, respectful, and most of all, he loved his daughter. Funeral Services will be held at 12 p.m. Friday, August 26, 2016 at Nordike Funeral Home in New Baden with Rev. Jason McIntosh officiating. Burial will follow at College Hill Cemetery in Lebanon. Friends may call Friday, August 26, 2016 from 10 a.m. until 12 p.m. at Nordike Funeral Home in New Baden. Memorials in memory of Corey may be made to the family and will be received at the funeral home.

The family of Corey Dale Brand created this Life Tributes page to make it easy to share your memories.

Send flowers to the Brand family.