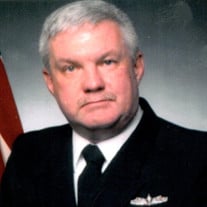 Command Master Chief Michael R. Byrne, USNR, Ret., 67, of New Baden, died Wednesday, January 17, 2018 at his home. He was born January 25, 1950 in E. St. Louis, IL, the son of William Robert and Martha E., nee Wallace, Byrne. He married Linda L. Clevenger on October 25, 1969 in E. St. Louis, IL and she survives in New Baden. In addition to his wife he is survived by three sons, Christopher M. Byrne of St. Louis, MO, Kevin S. (Mark) Byrne of Denver, CO, and Kenneth R. Byrne of New Baden, IL; his mother-in-law, Esther Clevenger of Waterloo, IL; and a brother-in-law, Darryl Clevenger of Marion, IL. In addition to his parents he was preceded in death by his father-in-law, Melvin H. Clevenger. Mr. Byrne retired with the rank of Command Master Chief from the United States Navy Reserve where he was stationed at the Naval Reserve Readiness Center in St. Louis, MO. He then went to work for Walmart as a zone supervisor. Mike was a member of the American Legion Post 0976 in Bartelso. Friends may call Tuesday, January 23, 2018 from 10 a.m. until 12 p.m. at Nordike Funeral Home in New Baden. In lieu of flowers, memorials may be made to the family and will be received at the funeral home.