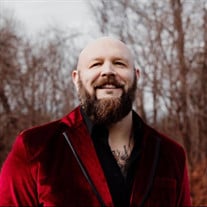 Clayton Dylan Melvin, age 41, died on Friday, January 14, 2022, at St. Elizabeth’s Hospital in O’Fallon. He was born in Belleville on May 8, 1980, the son of Darryl and Mary (McDonald) Melvin. He is survived by his wife, Nicole Melvin of Breese; his son Emery Melvin and Emery’s mother Sarah of Ballwin, Missouri; his father, Darryl Melvin, Marilyn of Arkansas; his mother Mary Melvin of Freeburg; and his father-in-law and mother-in-law, Matt and Lynn Athmer of Germantown. He was preceded in death by his grandparents. Clay had a passion for different variations of art, which were shown through his many tattoos. He enjoyed going to the city, especially Soulard and taking in all the sights of the unique architecture and style of living. Clay enjoyed reading, listening to podcasts, & was always listening to music. He was a longtime supporter of English Bulldog Rescue groups, as well as taking in many of his own. Clay was well known for his remarkable sales knowledge and was incredibly passionate about his job. Above all else, Clay loved his son, Emery more than words can explain. Being a father was his driving force of life. A Celebration of Life will be held from 1:00 until 5:00 pm on Saturday, January 22, 2022, at Maggie O' Brien’s located at 2000 Market Street, Saint Louis 63103 (Private Entrance). Memorials made in memory of Clay are suggested to his family, with checks being made payable to Nicole Melvin, and will be received at Nordike Funeral Home, 150 N. Clinton Street, Breese, IL 62230.

The family of Clayton Dylan Melvin created this Life Tributes page to make it easy to share your memories.

Send flowers to the Melvin family.