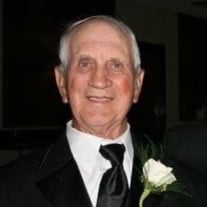 Clarence Benard Goebel, 92, of New Baden, died Saturday, September 4, 2021 at St. Joseph Hospital in Breese. He was born October 3, 1928 in Damiansville, the son of Frank A. and Catherine, nee Wiegmann, Goebel. He married Sandra McAdams February 6, 1982 in Belleville and she survives in New Baden. In addition to his wife he is survived by his children, Clarence B. (Andrea) Goebel, Suzette (Dan) Schniers, and Kim (Chris) Meissner; five grandchildren, Jaimie Albright, Chelsey Ratermann, Zach & Logan Meissner, and Ariella Goebel; two great-grandchildren, Lilly Albright, and Brooklynn Meissner, and was expecting the birth of another great-grandchild; and numerous nieces and nephews. In addition to his parents he was preceded in death by his siblings, Lucille M. Goebel, Helen Schrage, Ray Goebel, and Lawrence Goebel; and his sister-in-law and brother-in-law, Georgia & Mike Halasey. Mr. Goebel was a farmer his whole life. He was a member of St. Damian Parish in Damiansville. Clarence enjoyed spending time with his children and grandchildren. Funeral Mass of Christian Burial will be held at 10 a.m. Friday, September 10, 2021 at St. Damian Catholic Church in Damiansville with Rev. Steven Beatty officiating. Burial will follow at St. Damian Cemetery in Damiansville. Visitation will be held Friday, September 10, 2021 from 8 a.m. until 9:45 a.m. at St. Damian Catholic Church in Damiansville. Memorials may be made to St. Damian Parish and will be received at the church or Nordike Funeral Home, 15 E. Hanover St., New Baden, IL 62265 who is serving the family.

The family of Clarence Benard Goebel created this Life Tributes page to make it easy to share your memories.

Send flowers to the Goebel family.