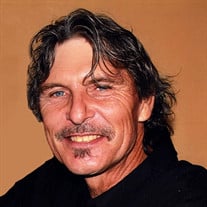 Chris R. Rohde, age 62, of Carlyle passed away on Friday, June 21, 2019 at Riverside Medical Center in Kankakee, IL. He was born on June 22, 1957 in Breese, the son of Fred and Geraldine (Crisel) Rohde. He married Kim Sheets and she survives in Carlyle. Chris was preceded in death by his parents and his father-in-law and mother-in-law, Wyman and June Sheets; his stepson Lance Schneider and a nephew Brayden Grayling. In addition to his wife, Chris is survived by a son Marcus (Shannon Bergin) Rohde, a daughter Christin (Nick Garza) Rohde, stepdaughter Jessica (Wes Carnes) Schneider, his siblings: Rhonda (Wayne) Grayling of Braidwood, IL, Robert (Joellen) Rohde of Chicago Heights, IL, Craig (Ana) Rohde of Homewood, IL, and Fred (Sue) Rohde of Lowell, IN,; two grandchildren, Adele` and Loralei; and his in-laws: Ricky (Vicky) Sheets, Sandra (Donald) Maas, Cheryl (Louis) Keith, Wyman (Lori) Sheets, Tamarah (Robert) Mason, Kevin Sheets, and Micheal Lea Sheets all of Carlyle; as well as many nieces, nephews, and cousins. Chris was a graduate of Carlyle High School. In the mid 70’s he was one of Illinois’ elite pitchers and played many seasons in the Legion Baseball League. He was a lifelong St. Louis Cardinals Fan and a friend to everyone he met. Mr. Rohde was a member of Life Church in Carlyle and a Veteran of the United States Navy. He worked for Nicor Gas Company for 20 plus years. He will be remembered as the life of the party and a hardworking, loving father. Funeral services will be held at 10:00 AM on Saturday, June 29, 2019 at Life Church in Carlyle with Pastor Jason McIntosh officiating. Interment will follow at Carlyle Township Cemetery. Visitation will be on Friday, June 28, 2019 from 4:00 until 8:00 PM and from 9:00 until 10:00 AM on Saturday all at Life Church in Carlyle. For loved ones in the Chicagoland area, a celebration of life gathering will be held at a later date. Memorials are suggested to the Rohde family and will be received at the church or at Nordike Funeral Home, 740 Fairfax Street, Carlyle, IL 62231.

Chris R. Rohde, age 62, of Carlyle passed away on Friday, June 21, 2019 at Riverside Medical Center in Kankakee, IL. He was born on June 22, 1957 in Breese, the son of Fred and Geraldine (Crisel) Rohde. He married Kim Sheets and she survives... View Obituary & Service Information

The family of Chris R. Rohde created this Life Tributes page to make it easy to share your memories.

Send flowers to the Rohde family.