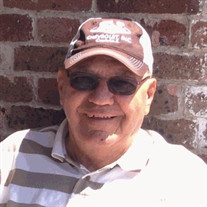 Cecil Marlin Brown, 78, of Trenton, died Wednesday, October 18, 2017 at Aviston Countryside Manor. He was born January 30, 1939 in Washington Park, the son of Lillard and Hilda, nee Bardmass, Brown, Sr. He married Phyllis Jean McCauley March 22, 1963 in Caseyville and she survives in Trenton. In addition to his wife he is survived by a son, William (Suzan) Brown of Trenton; two grandchildren, Nicole (Bryan) Wernle and Cassandra (fiancé, Carolyn Brickey) Brown all of Trenton; three great-grandchildren, Jorja, Eliza, & Myla Wernle; a brother, Eugene (Jeannette) Brown; a sister-in-law, Jan Brown; and numerous loved nieces and nephews. In addition to his parents he was preceded in death by two brothers, Lillard Brown, Jr. and William Brown; a sister, Charlotte Watts; and sister-in-law and brother-in-law, Beatrice Brown and Thomas Watts. Cecil was a proud operator for Consolidated Freightways up until his retirement. After retiring, he enjoyed driving cars for local dealerships but especially K&J Chevrolet in Carlyle. He knew the roads like the back of his hands and he never met a stranger. He loved to sit and shoot the breeze with his buddies and play cards on Sunday nights. Cecil loved to travel and see new places around the country, and especially enjoyed finding new mom and pop restaurants to try when he and Phyllis traveled. He loved spending time with some of his greatest joys, his granddaughters and great-granddaughters. He was a member of Grace Community Baptist Church in Trenton, the Masonic Lodge in Trenton, and the Ainad Shriners of E. St. Louis. Graveside Services for family and friends will be held Thursday, October 26, 2017 at 1 p.m. at Trenton City Cemetery. Memorials may be made to the family and will be received at Nordike Funeral Home, 15 E. Hanover, New Baden, IL 62265 who is serving the family.

The family of Cecil Marlin Brown created this Life Tributes page to make it easy to share your memories.

Send flowers to the Brown family.