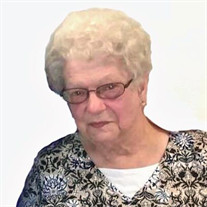 Catherine G. Helfrich, age 87 of Beckemeyer passed away on Wednesday, August 3, 2016 at Aviston Countryside Manor. She was born in St. Louis, Missouri on April 10, 1929 the daughter of William O. and Ruth A. (Woodring) Casagrande. She married... View Obituary & Service Information

The family of Catherine G. Helfrich created this Life Tributes page to make it easy to share your memories.

Catherine G. Helfrich, age 87 of Beckemeyer passed away on Wednesday,...

Send flowers to the Helfrich family.