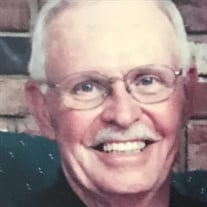 Carl P. Bann, 85, of New Baden, IL, born February 28, 1933 in New Baden, died on Sunday, July 1, 2018 at St. Elizabeth’s Hospital in O’Fallon, IL. Carl graduated from New Baden Community High School Class of 1951. He served in the United States Air Force from 1952 to 1956 during the Korean War. He graduated from McKendree College in the summer of 1958, and attained his Masters Degree in Education from Southern Illinois University, Edwardsville, in the summer of 1968. Carl taught in Wesclin School District #3 teaching at St. George in New Baden and St. Mary’s in Trenton before transferring to Wesclin Jr. High to teach 7th Grade Mathematics. He spent the last ten of his 34 years in education as Principal of the New Baden Elementary Schools. Carl was a lifelong member of the New Baden American Legion Poelker Post 321 and a member of the O’Fallon Knights of Columbus Council 4239. He loved playing softball, but most especially golf. He is survived by his two children, Teri (John) Scott of Trenton and Lisa (Rob) Knowles of Richardson, TX; five grandchildren, Matt and Ryan Reilman, Ashley Korte, and Christin and Alexandra Greco; and a brother, James (Geri) Bann. Carl was preceded in death by his parents, James W. and Dolores (Kassebaum) Bann, Sr.; his wife, Donna (Carlock) Bann whom he married on June 4, 1980 in St. Louis, MO and she preceded him in death on February 13, 1999; his siblings and their spouses; Bill (Mildred) Bann, Jr., Ralph (Lucille) Bann, Paul (Virla) Bann, Gloria (Joe) Hebenstreit, Marilyn (Charles) Sachs, Bob (Betty) Bann, and Susan (Gerald) Chapple. Funeral Mass of Christian Burial will be held at 10 a.m. on Wednesday, July 4, 2018 at St. George Catholic Church in New Baden. Burial will follow at Greenmount Cemetery in New Baden. Friends may call from 4 p.m. until 8 p.m. on Tuesday, July 3, 2018 at Nordike Funeral Home in New Baden and from 8 a.m. until 9:45 a.m. on Wednesday at St. George Catholic Church in New Baden. Memorials may be made to St. George Catholic Church and will be received at the funeral home or church.

The family of Carl P. Bann created this Life Tributes page to make it easy to share your memories.

Send flowers to the Bann family.