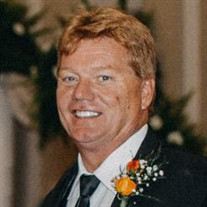 Brian Gerard Brandmeyer, 50, of Germantown, died Sunday, August 5, 2018 at his home. He was born March 1, 1968 in Breese, the son of Ralph H. “Rudy” and Patricia C., nee Luitjohan, Brandmeyer. He married Mary Ann Penney on August 17, 1991 at St. Damian Catholic Church in Damiansville and she survives in Germantown. In addition to his wife he is survived by his children, Scott (Teresa) Brandmeyer of Damiansville, and Mikaela (Jacob Bickline) Brandmeyer; a granddaughter, Prestyn Brandmeyer; his mother, Patricia Brandmeyer of Damiansville; his mother-in-law, Audrey Penney of DeSmet, SD; his siblings, Roger (Mary) Brandmeyer and Anita (Jerry) Arentsen all of Damiansville, Doris (Myron) Thole and Lisa (Duane) Niemeyer all of Aviston, Brenda (Rusty) Lappe of Breese, and Judy (Rob) Savant and Alan (Melissa) Brandmeyer all of Edwardsville; and brothers-in-law and sisters-in-law, Ron & Jeanne Penney of DeSmet, SD, and Jeff & Diana Penney of Billings, MT. In addition to his father he was preceded in death by his father-in-law, Jim Penney; and a nephew, Blake Thole. Mr. Brandmeyer was a maintenance supervisor for Missionary Association of Mary Immaculate in Belleville and was a veteran of the United States Air Force. He was a member of St. Damian Parish in Damiansville and the Sons of the American Legion. Brian loved deer hunting, but above all, he devoted his time to family, friends, and being a grandpa. Funeral Mass of Christian Burial will be held at 10 a.m. Thursday, August 9, 2018 at St. Damian Catholic Church in Damiansville. Burial will follow at St. Damian Cemetery in Damiansville. Visitation will be held Wednesday, August 8, 2018 from 4 p.m. until 8 p.m. and again on Thursday, August 9, 2018 from 8 a.m. until 9:45 a.m. at St. Damian Catholic Church in Damiansville. Memorials may be made to the American Diabetes Association and will be received at the church or Nordike Funeral Home, 15 E. Hanover St., New Baden, IL 62265 who is serving the family.

The family of Brian Gerard Brandmeyer created this Life Tributes page to make it easy to share your memories.

Send flowers to the Brandmeyer family.